Buck, which made the Academy of Motion Picture Arts and Sciences shortlist for Documentary Feature (but ultimately missed out on a nomination), has an Australian cinema release on Thursday February 16. Directed by Cindy Meehl, Buck is the real-life story of a true American cowboy, Buck Brannaman, a master horseman and a man brimming with goodness, whose hard-earned wisdom and unique philosophy on life has been an inspiration to people around the world. 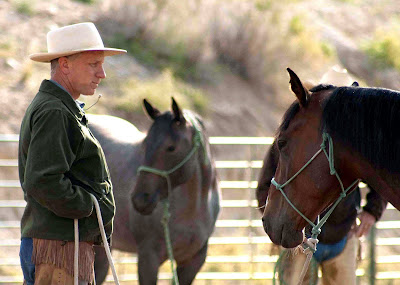 Buck chronicles Brannaman’s extraordinary life from his troubled childhood, where he was a child prodigy with a rope and lasso (performing on stage and television), but also the victim of physical abuse from his father, to his inspiring adult work as a highly skilled horse trainer. He spends nine months of the year on the road, giving four-day workshops on horse handling in towns across the United States. If there were a ‘Horse Whisperer’ in the world today, it would be Buck Brannaman. Though he often spends time away from his wife and children, his daughter Reatta, also gifted with a rope, often accompanies her father and sleeps in a tent next to Buck’s mobile home and horse trailer.
Buck was, in fact, one of the inspirations behind The Horse Whisperer, the 1995 novel by Nicholas Evans. Robert Redford directed a film adaptation in 1998, playing the role of the eponymous trainer. Buck, following in the footsteps of his idol and mentor, Ray Hunt, had already become famous and was brought in as an on-set consultant and trainer. There is some interesting behind-the-scenes footage of the making of the film, and an interview with Redford, revealing how instrumental Buck was in making important scenes work realistically, even offering one of his own horses to play a role.

Buck has this extraordinary ability (a unique passion that he has mastered into an art form) of being able to tame and control disobedient horses, and teaches them not only how to respond to their owners, but the owners a thing or two also. It is the people who come to him for help, but ultimately he ends up helping the horses, by educating their owners on proper rearing. He has been phenomenally successful, to an awe-inspiring degree, of being able to transform them from unmanageable wild beats into respectful companions. Buck’s ability to recognize and understand acts of intimidation and aggression, cruelty and suffering means that he can eschew the violence present in his upbringing, and teach people to communicate with horses through sensitivity, by establishing a bond of trust through empathy, tolerance and compassion – which he argues is paramount to raising a human child and facing the challenges of day-to-day life.
At only 88 minutes, the film feels a little thin and isn’t really interested in being objective, choosing to capture Buck in an idolatry light. I was surprised to find the film’s middle to move a little slow, and initially found the structure to be a little uneven. I guess the fact that it abandoned the traditional structure of opening with his childhood and working from there is a commendable trait. The impact of this sad period of his life, which certainly had a bearing on his eventual life philosophies and an influence on the wisdom he entrusts to others, is introduced at opportune times. I thought an account from his brother (who is curiously unseen for the entire film - and no doubt for an acceptable reason) would have strengthened the film even further. Beautifully shot – the captures really make you feel like you are part of the crowd, and there are some great decisions made when choosing to be intimate and taking the viewer inside the training ring, and when to remain a distant observer. 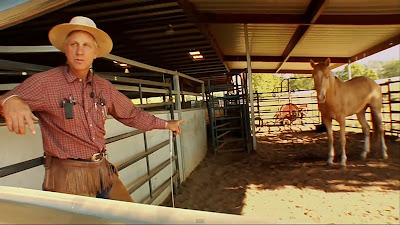 What makes him such a strong character are the dark times he has experienced in his life – literally grabbed away from his father’s abuse and raised by foster parents – and how he has reflected those experiences by building a loving relationship with his own daughter, and by treating his patients with a sense of compassion, and not with aggression or disrespect. He earns their respect by establishing a mutual understanding. Intriguingly, not only are the horses fractious, but their human owners too – “Often instead of helping people with horse problems, I’m helping horses with people problems” Buck claims at one point.
He meets his match with one particularly dangerous colt, introduced near the end of the film. This is when the atmosphere in the theatre will become tense. When he learns that the owner has a field full of studs at home, he has no hesitation in claiming that this horse, though it was feared to have been mentally disabled at a young age, is uncontrollable because of its upbringing. When he spots a problem horse, I guess his natural instinct is to credit the owner’s negligence - much like his own father's. But he has proven that being given a rough deal doesn't always translate into a tough life, and this is the attitude that he spreads through his sessions. His abilities stretch beyond ‘horse whispering’ and this will even prove to be a moving and inspirational experience for viewers who have no interest in horsemanship. The sign of a successful documentary is to transcend the subject matter, and like Bill Cunningham New York, this intimate exploration into the life and achievements of a fascinating character is well worth your time.
My Rating: ★★★★ (B)
Posted by Andy Buckle at 11:58 PM