The curiously named Cherchez Hortense (Looking for Hortense), co-written (with Agathe de Sacy) and directed by Pascal Bonitzer, is breezy, humanistic, handsomely lensed, but ultimately an unspectacular French dramedy. With sprinkles of a mid-life existential crisis come redemption tale, a strained father-son relationship, the unraveling of a tired marriage and a semblance of a social commentary, Bonitzer incorporates too many strands in his narrative. It is neither dramatic nor funny enough to leave a lasting impression. 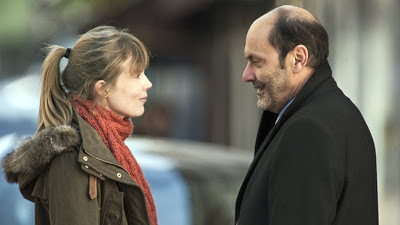 We are initially led to believe that the story will follow Kristen Scott-Thomas’ theatre-director Iva, but following the opening scene of her stressing about a scene in her new play, and acknowledging her handsome cast member’s attraction to her, the story then shifts to her lethargic husband Damien (Jean Pierre Bacri), whom we follow for the remainder of the film. He is a lecturer in Chinese customs at a business school, but is predominantly housebound taking care of the couple’s son Noe (Marin Orcand Tourres), with Iva working late, and suspiciously staying out later.


Continue reading at Graffiti With Punctuation.
Posted by Andy Buckle at 5:22 PM