Directed by Chris Buck and Jennifer Lee, from a screenplay by Lee, Frozen is loosely based on Hans Christian Anderson’s fairy tale The Snow Queen and sees Disney make a glorious return to the classical musical-animation, which included a string of masterpieces in the early 90′s, but in stereoscopic 3D rather than hand drawn. Returning us to a magical realm of kingdoms and princesses, with an entertaining adventure tale of fraying sisterhood, cursed sorcery and hapless snowmen, this stunning animated feature is perfect family viewing this holiday season. 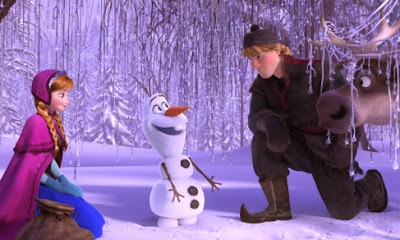 Elsa (Broadway star Idina Menzel), the princess of Arendelle possesses the rare ability to conjure ice and snow. When she accidentally freezes her younger sister Anna (Kristen Bell) as a child, the King and Queen seek help from Trolls who manage to heal Anna, but are forced to remove any memory of her sister’s powers. In order to protect Elsa the family locks themselves away in the castle, with Elsa, out of fear of hurting her sister again, remaining in isolation. A rift develops between the sisters as they grow up, which continues until the day of Elsa’s royal coronation, and the anticipated re-opening of the castle, several years later.

When Elsa rejects Anna’s acceptance of the whim marriage proposal by the visiting Prince Hans (Santino Fontana), her secret powers are exposed to all, including the visiting dignitaries. When the entire Kingdom is sent into an eternal winter, greedy profiteers target the fleeing Elsa. Anna, with the help of some companions she meets on her journey – a rouge ice trader named Kristoff (Jonathan Groff), his royal reindeer Sven, and her childhood snowman Olaf (Josh Gad), re-created as part of the magic – set out on a journey through the frozen, snow-capped realm to find and protect Elsa, and help her to save Arendelle.


Continue reading at Graffiti With Punctuation.
Posted by Andy Buckle at 2:08 PM