This handsomely produced period drama expresses a fondness for the 19th Century literary genius of Charles Dickens while serving as a compelling biographical exploration of an emotional and tragic personal chapter of his life, when he was at the height of his fame. Ralph Fiennes, who stars as Dickens, proves to be an excellent director, crafting just his second feature, following his critically lauded adaptation of Shakespeare’s Coriolanus. Based on the Claire Tomalin book The Invisible Woman: The Story of Nelly Ternan and Charles Dickens, the script is penned by Abi Morgan (Shame). 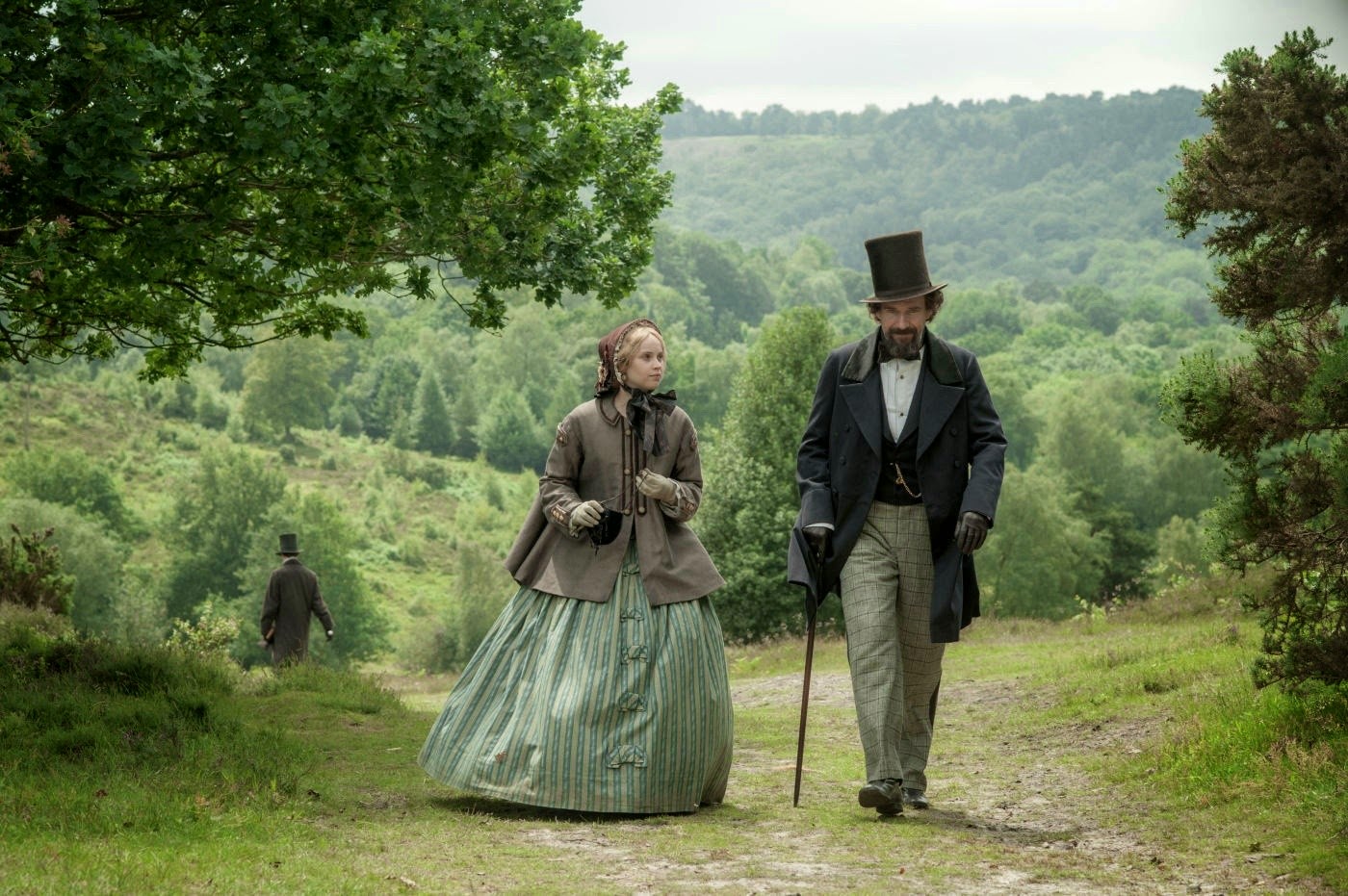 The Invisible Woman is set over two time periods. Opening in 1885 we are introduced to Nelly Wharton Robinson (Felicity Jones), a mother and schoolteacher who runs a school for boys with her husband George (Tom Burke). Though she thoroughly enjoys her life and staging elaborate plays with the schoolchildren, including the finest of those by Wilkie Collins and Charles Dickens, she is haunted by events of the past. She takes long walks on the beach, lost in thoughts provoked by remorse and guilt.

We flash back to 1857, when a then 18-year-old Nelly is attending rehearsals with her actress mother (Kristin Scott Thomas) and sisters. She is assigned a small role in The Frozen Deep by the charming and charismatic director, Mr Charles Dickens (Fiennes), though she doesn’t possess the acting talents of her mother. Not only a genius of the written word, Dickens is also a talented amateur actor and energetic director, yet reveals himself as not being as emotionally coherent as a man when outside the realm of craft. Their affection begins to grow after several personal encounters – a party to celebrate their successful performance, a trip to the Doncaster Races – before Dickens pursues the dangerous affair with Nelly. Their courtship was sensuously charged and their covert meetings had genuine emotional stakes. Even beyond Dickens’ death in 1870 and after he separated from his wife, their relationship was kept a secret.

Nelly – who became Dickens’ muse during the later stages of his career - never lost her admiration for the work from the man she loved. Her curiously intimate knowledge of Dickens does not go ignored; something that would never disappear despite her personal recreation of herself to ensure she moved on with her life. Will she have the chance to offload the weight – and price, a life of “invisibility” - of her secrecy?


The film's pacing is slow, and becomes a little wearying in the latter half, but Fiennes' terrific direction livens up this well-performed tale by surrounding this involving story with exquisitely dressed sets and lavish costumes (which were deserving of a recent Oscar nomination). The film’s structural experiments also work well in building emotional density, courtesy of Fiennes and Morgan’s collaboration with Tomalin and their decision to keep the story grounded in what Tomalin revealed in her book. Dickens, alone, is a compelling character, but how many of his admirers were aware of his mistress? What happened to her? How did she live with the secret? She becomes the heart of the story, and yet it simultaneously feels like a serviceable Dickens biopic.


I was also impressed by the photography. The film opens with a shot of an empty beach with a wide-angled lens, and from the right of the screen a tiny figure emerges, walking at pace. It is a stunning composition, and the significance of these beach sequences are revealed in time. Fiennes and his DP Rob Hardy have an eye for photographing by night and there are other lengthy (and difficult) shots that caught my attention too.


Dickens is portrayed as being a charismatic, humble and personable man of impeccable manners and great energy. Fiennes is instantly likable in the role, and is admirably modest about his overwhelming celebrity status. He is met by admiration wherever he goes, and his personal oratory of his famous works keep his audiences captivated. We can see how relegated Catherine Dickens is, both in the social hierarchy of the events, and in the spatial compositions. There are some grueling emotional moments, none less than Catherine reading the announcement of their pending divorce in the paper, and her personal delivery of a bracelet to Nelly, a gift from Dickens wrongly to delivered to Catherine.


Fiennes, again, is very good. With The Grand Budapest Hotel (another brilliant performance) also in cinemas this month, he will be all over Australian screens.  There are subtle nuances to his performance, especially as his fondness for Nelly becomes clear. His attraction (he is drawn to her via a mix of fascination and admiration) is evident immediately, but there are times when he is reduced to the anxieties of a shy little schoolboy when in Nelly’s presence. Yet, Fiennes carries the swagger of academia, giving every indication that he is the man responsible for some of the finest works of literature. While Catherine is perhaps too ordinary and obviously sidelined here, Dickens’ attraction to the younger woman, and the unfulfilling nature of his marriage is believable and non-condemnable. Jones is excellent too, effectively playing characters younger and older than her own age, her conflictions written in her expressions.


Ralph Fiennes is coming to Sydney as a guest of Palace Cinemas. He will be partaking in an exclusive Q&A following their screening of the film on Monday 14th April at Palace Norton Street. The Invisible Woman comes to cinemas April 17th.
Posted by Andy Buckle at 9:38 AM