Gillian Flynn’s bestselling 2012 pulp novel, the macabre and sinister mystery thriller Gone Girl, has been given the David Fincher treatment. In the vein of some of his best films Se7en, Fight Club and Zodiac, Fincher has again delved into the darkest and most unpredictable realms of the human psyche. Fincher’s last film was a Steve Zaillian adaptation of Stieg Larsson’s global phenomenon, The Girl With the Dragon Tattoo, which he managed to transform into a rich, deliciously stylish and brilliantly performed thriller, despite barely covering up the narrative flaws. Flynn’s self-adaptation of her material is impressively efficient and faithful all of the way, her story tossing aside conventional mystery elements and revealing a stunning twist that will take the newly acquainted some processing to get their head around. This film raises concerning questions about just how well we know the people closest to us, taking on a very modern cynical view of marriage and satirizing the lecherous media-swarm willing to turn any whiff of domestic drama into a sideshow. 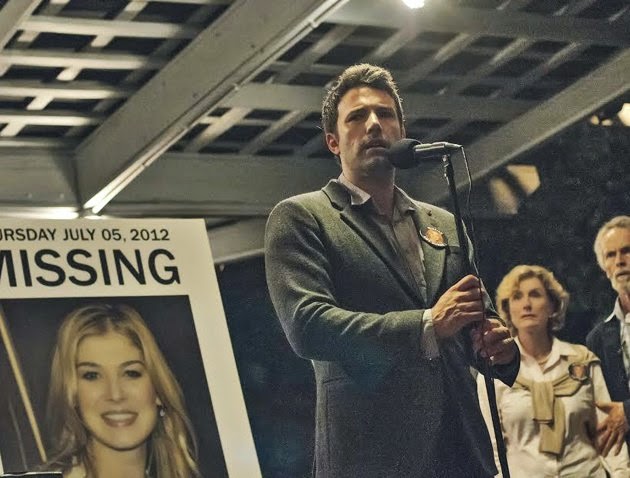 On the morning of his fifth wedding anniversary Nick Dunne (Ben Affleck, perfectly cast and inhabiting the character with an appropriate amount of emotional vacancy and smug aloofness) returns home to finds his living room ransacked, evidence of blood in his kitchen and his beautiful wife Amy (Rosamund Pike) missing. The circumstances are certainly suspicious and the investigating police, who believe he is hiding something, immediately put Nick under pressure. His strange behaviour in front of the camera and in reaction to whirlwind media frenzy certainly suggests he is.

While trying to keep his own secrets bottled up, Nick begins to put together the pieces of Amy’s annual anniversary hunt, and learns that prior to her disappearance she had set up a string of clues that threaten to reveal those secrets and make his case look even more dire. He finds an ally in his tough-skinned sister Margo (Carrie Coon) and super attorney Tanner Bolt (Tyler Perry), but is publicly embarrassed as their seemingly blissful union is picked apart - revealing not only that the pair had lost their jobs to the recession and were considering divorce, but also that Amy had begun to fear for her life.

The changes from the novel are minor, with alterations to the narrative’s structure and excerpts taken from Amy’s diary (with voice-over by Pike) intelligently kept sparse. Flynn does a great job of balancing the events of the early days of disappearance with the origins of their relationship, and snippets of how the marriage had started to disintegrate. The accounts aren't trustworthy. We learn enough about this couple through half a dozen sharply constructed flashbacks; the reasons they left New York for Missouri; their aggressive sexual dynamic, and how Amy was the influence behind her parents’ popular ‘Amazing Amy’ book series, to be well-informed.

Gone Girl delves into the façade of marriage and the roles people may choose to play to keep the peace. Everyone plays different roles in their lives, whether it is a husband or a father, an employer or employee, and how they mold themselves into that role is influenced by a lot of different things. There are obstacles to any relationship, but one can never be sure how to deal with them. We learn that Nick responded unhealthily, but not in any way maliciously. We discover that he is not such a bad guy overall, and we start to empathize with the situation he finds himself in.

How can one play the role of the concerned husband if they don’t feel the distress of the situation? If there is some relief mixed in there, perhaps? In a world where reporters and cameras are swooping at every opportunity, appearances are everything and even innocent reactions (an out of place smile, and accommodating those who have offered to help) will very likely be misconstrued by the media. A whole different story can be spun, and the truth can be shrouded by a media shit-storm. Like The Girl With The Dragon Tattoo, this is a fantastic analysis of how social media and television can transform a newsworthy story into a 24-hour-a-day obsession.

The film’s humour – whether it is Bolt throwing gummi bears at Nick as he coaches his responses to the tough questions, Nick’s ridiculous posing for the media, or the banter between Detectives Boney and the largely-silent Gilpin – is a surprising element, and worked in pretty well.

Fincher's hotshot team are all involved. The latest Atticus Ross and Trent Reznor score (they also worked on the The Social Network and The Girl With the Dragon Tattoo) is simmering beneath the surface of the narrative, setting the tone but rarely emerging prominently. As stand alone work, though, it is pretty great. This might be one of the least interesting looking film Fincher has made. I understand what he and his DP Jeff Cronenweth was going for, and there were interesting decisions to leave some character’s faces completely in shadow, but I usually love Fincher’s window into the world and this one didn’t really engage me in a visual sense. But, Kirk Baxter (who has won two Academy Awards with Angus Wall for The Social Network and Dragon Tattoo) is one of the best editors in the business. His record – three films and as many Oscar nominations – is incredible. There are flashbacks, montages and dual strands within this complex story, but his work is seamless.

Again, Affleck is pretty much right on here. An excellent performance, embodying perfectly the character I envisioned in the novel. I can’t quite figure out what felt off about Pike or explain without spoilers, but she certainly looks the part and the mechanics of her mindset are always unpredictable. The supporting cast is excellent, with some cunning choices. Tyler Perry is perfect, which I am sure will be a surprise for many. Neil Patrick Harris has an out-of-character turn as a yuppie creep, while Carrie Coon and Kim Dickens have some of the film’s best moments, filling their hefty supporting roles with human touches. Casey Wilson, Missi Pyle, Emily Ratajkowski, Patrick Fugit and Scoot McNairy round out the winning ensemble.

Fincher’s filmmaking aesthetic is naturally cold, but Gone Girl took a long time to get really chilling. I had read the novel, so I knew what I was in for, and some of the far-fetched second half developments remain so. I wasn't so satisfied with how everything wraps up in the novel, but I was hoping for the Fincher-ness to elevate it. It didn't, really. Still, this is a film that embraces it's trashiness, instead of trying to hide it, and one doesn't leave the cinema feeling so good. For that reason it hasn't gone away, and why I can't possibly dismiss it.