A new Quentin Tarantino film is always an exciting addition to the cinema year, and with his latest, Django Unchained, I was once again blown out of my chair. It is further evidence that QT, an unabashed film lover whose screenplays possess some of the sharpest and funniest dialogue to ever grace the screen, is one of the most daring filmmakers in the business. Here he tackles pre-Civil War era America, with racism and slavery at its most despicable, in the style of a Spaghetti Western. Like his 2009 masterpiece, Inglourious Basterds, he re-writes the history books his own way, offering up a canvas equally entertaining and confronting. With stunningly orchestrated and meticulously coordinated set pieces, equipped with hilarious exchanges, bursts of bloody violence and terrific musical accompaniment, Tarantino displays a veteran sense of shrewd consideration and effortless assurance. 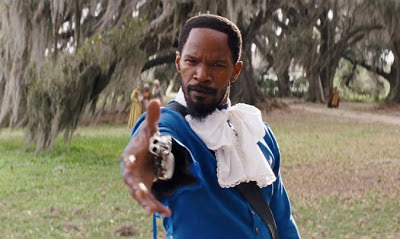 We are first introduced to the titular Django (Jamie Foxx) as a male slave being transported across Texas as part of a chain gang. An encounter with Dr. King Schultz (Christoph Waltz), a German travelling dentist-turned-bounty hunter, leads to Django’s freedom and the formation of an agreement between the unlikely pair. Django is to help Schultz search for and identify a trio of ruthless killers, and he in turn will be sent on his way. Their adventures result in Schultz molding Django into his associate, and when Django reveals that his wife, Broomhilda (Kerry Washington), was sold away from him years earlier, they decide to locate her. Schultz creates a guise for the pair as potential purchasers of a Mandingo fighter – slaves forced to fight to their deaths for entertainment and gambling purposes – and devises a plan to free her from her current owner, the charismatic but merciless Calvin Candie (Leonardo DiCaprio), proprietor of a thriving plantation known as Candyland.

Continue reading at Graffiti With Punctuation.
Posted by Andy Buckle at 3:44 PM