Monsieur Lazhar, the wonderfully touching Canadian French language drama from writer-director Philippe Falardeau, today picked up the audience award for Best Narrative Feature Film at the Sydney Film Festival where it screened as part of the Official Competition. It was also nominated for Best Foreign Language Film at the 84th Academy Awards, and won six Genie awards from its nine nominations. The screenplay was developed from Bashir Lazhar, a one-character play by Evelyne de la Cheneliere, with Mohamed Said Fellag giving a delightfully compelling performance and bringing the kind and endearing titular character to life. From my reading, it is just about a perfect film. 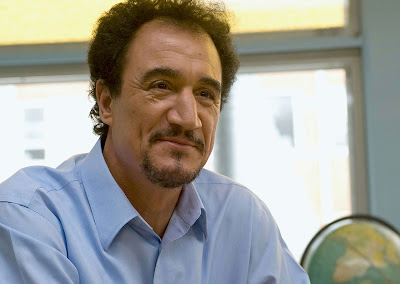 Set predominantly in an elementary school in Montreal, Monsieur Lazhar follows Bashir Lazhar (Mohamed Said Fellag), a 55-year-old Algerian immigrant who is hired to replace a teacher who has recently killed herself. In the film's opening sequence one of the students in her class discovers that she has hanged herself in their classroom. Despite a complete refurbishment of the classroom the class, and in extension the entire establishment, remains in crisis; a state of grief, with the students feeling confused and betrayed by their teacher, whom they adored.

Despite the cultural gap and some difficulty adapting to the school system's constraints - very strict on teacher/student contact, from a whip around the ears to a consoling hug - Bashir begins to get to know his shaken but endearing pupils and both them and his faculty begin to warm to his gentle personality and unique teaching style. They begin to love and respect his thoughtfulness, patience, his caring understanding and general all-round kindness, while the tragedies of his past and his precarious refugee status - an ongoing legal case throughout the film - remain unknown to all, and ultimately could threaten his position at the school.

What impressed me most about Monsieur Lazhar and what were essential to the film's success were the performances from the ensemble cast of child actors. Falardeau, evidently a very nice man from his enthusiastic introduction of the film, appears to have a great rapport with the youngsters. Two in particular - Alice (Genie award-winning Sophie Nelisse) and Simon (Emilien Neron) - have strong individual arcs. 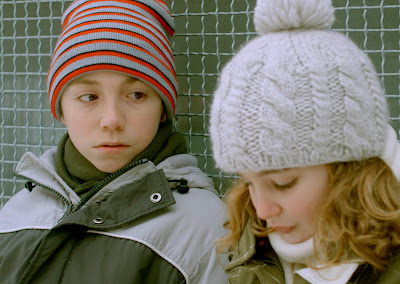 We are informed that a past incident between Martine and Simon might have been the last straw for a woman experiencing many mental problems. Alice, whose mother is a pilot and very often absent from her life, viewed Martine as a substitute parent and is hugely affected by the loss, personally blaming Simon, who is the most wayward of the children. He is a bully and is disrespectful to Alice and his peers, but is acting out having been plagued by guilt.
Alice begins to warm to Bashir in much the same way as we believe she did with Martine. Sophie Nelisse is phenomenal. A speech she gives is tear-inducing and she has such a great face. Falardeau perfectly captures the moroseness of her grief and her joy at discovering her and Bashir's mutual love for novels is a beautiful moment. The classroom sequences also feature more than half a dozen students in less prominent but key supporting roles. 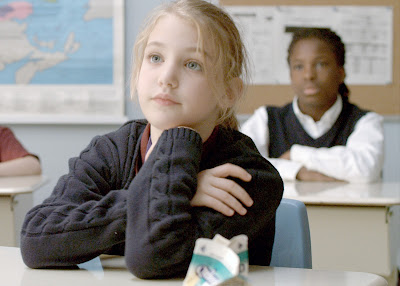 The adult characters are just as well drawn. The school principal, Madame Vaillancourt (Danielle Proulx, C.R.A.Z.Y), Gaston (Jules Philip), the jovial gym teacher (one of only three males on staff) and Claire (Brigitte Poupart), the drama teacher who takes a romantic interest in Bashir, all have amusing roles, but it is Fellag who is the film's most sensational asset. What a guy. His story is tremendously life-affirming and heartwarming.
With great restraint and subtlety, Falardeau deftly balances multiple issues. Economic and social struggles in Algeria are alluded to, which result in Bashir's personal tragedy and forced immigration. An ongoing lawsuit to clear up some matters never overshadows the relationship between Bashir and his students, and is beautifully underplayed to serve purely as character development. It is also an examination of how young children react to, mourn and struggle to heal from an act of suicide. Failing to understand what brings a person to suicide, Alice struggles to accept that she is gone and shifts the blame, while Simon, for reasons revealed throughout the film, is wrestling with his guilt. 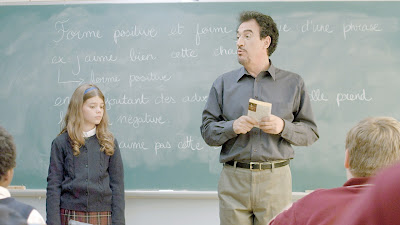 Monsieur Lazhar is not the typical story of an inspirational teacher who comes in and changes the lives of everyone they meet. A lot of the characters, especially some of the children, are also kind and endearing. It doesn't succumb to easy doses of sentimentality, but instead tells a genuine and gentle tale that is grounded in a reality that feels organic. The simplicity of the story is effective, yet there are several layers that give it surprising depth.

It is a testament to Falaredeau's stellar writing and direction to involve all of these issues and examine them in a tender and sincere way, while keeping his audience glued to the screen. Technically, it cannot be faulted either and mention must go to Martin Leon for his original music score, and Stephane Lafleur for his elegant editing. Monsieur Lazhar is a delight. It could not have been better and is almost impossible not to find it emotionally affecting on some level.