As I had some time to wait before I was to meet up with Sam, flying in that morning from Sydney, I decided to seek out a cafe I had visited with some friends in the past. I knew it was on Little Bourke Street, and very likely up one of the side alleys, which unlike Sydney are usually brimming with life. One thing I enjoy about Melbourne is that strolling up these alleys usually reaps rewards and I discovered this new trendy cafe. They had delicious bagels. Meeting up with Sam, we headed straight for our hotel, The Grand Mercure, situated out in the Docklands, checked in and then caught the tram back into the city. 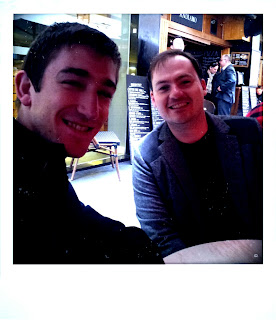 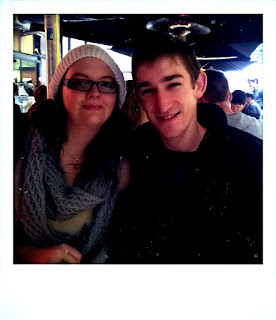 We met up with Cam for lunch at Beer Deluxe, and then headed out to Now Showing, an awesome store for extreme film buffs. Dave (@nowshowinghigh), who runs the store, is an extremely kind, generous, knowledgeable and passionate guy and he has a great collection of rare, collectable, special edition dvds and blu-rays. We shared some movie chatter and I walked away with some treasures - Suspiria and Invasion of the Body Snatchers on DVD. If you're after a rare/hard to find DVD or blu-ray, Dave is the man to talk to. Sam, Cam and I then headed back to the city, and back to the Forum Theatre for In the Fog, winner of the FIPRESCI Prize at Cannes earlier in the year.


In The Fog - Directed by Ukranian filmmaker Sergei Loznitsa, In the Fog is set on the German occupied western frontiers of the USSR in 1942. The extraordinary opening shot sets the tone for the remainder of the film and establishes that three men have been hung by the Nazis as punishment for being saboteurs. A fourth member of the railroad unit, an innocent man named Sushenya (Vladimir Svirskiy), is mysteriously let go, but not before being offered a deal to collaborate with the Nazis. Though he refuses, he is still let go, but once rumour spreads that he may have cut a deal with the Germans and betrayed his comrades, two partisans turn up at his house, prompt him to bring a shovel and escort him into the forest. A twist of fate leaves Sushenya alive and one of his escorts wounded, and faced with a moral dilemma he continues to save not only his own dignity, but also those in his company. We are privileged to flashbacks of the stories of each of the three central characters, and learn why Sushenya was hunted.

It is incredibly stark, grim and atmospheric, and comparable to Klimov's 1985 masterpiece, Come and See, but its a drawn-out slow burner which becomes laborious and does test one's attention. There are some very powerful scenes and the photography is absolutely sublime. The hypnotic, lengthy takes compel, and Sushenya's story - which includes him carrying death on his shoulders like his own cross - is the most haunting. A psychologically powerful study of murky moral decisions, coming to terms with guilt and deciding whether to maintain one's honour or simply give up. In the Fog is a film I will never ever revisit, because the narrative is so methodical and stretched out, but there is still plenty to admire. ★★★ (B-)

We left In the Fog and raced to the sold out session of The Imposter. We scrambled for three seats together and they were surprisingly quite good. So was The Imposter. One of my big regrets was missing it at the Sydney Film Festival. It was the MIFF highlight and one of the best films of the year so far. 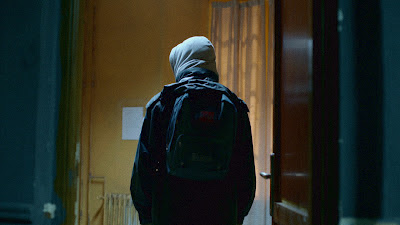 The Imposter - In 1994, a 13-year-old boy, Nicholas Barclay disappears from his rural hometown in San Antonio, Texas without a trace. Three and a half years later, his family is contacted with the news that Nicholas has turned up...in an orphanage in southern Spain. He has a story of kidnap, abuse and torture - at the hands of the military - and is evidently a very different person to the blue-eyed, blonde-haired youth who went missing. Not all is as it seems, and we soon learn that the boy welcomed home by Nicholas' overjoyed, yet completely oblivious family is not Nicholas Barclay at all, but Frederic Bourdin, a 23-year-old French man. The Imposter is a truly mind-blowing documentary which blends real-life testimony with sleekly photographed re-enactments. Despite hearing both sides of the tale, and we gather further insight from investigating parties and those involved with the reuniting of the family with their supposed son, we still leave feeling like we are no closer to complete authority on the truth behind this bizarre story.

During my post-screening research I learned that there have been some hostile responses to The Imposter with claims made that Bart Layton trivialised the boy's disappearance, made a mockery of the family - who are either really dumb, are so susceptible in their grief they will accept anyone into their home, or are hiding some sinister secrets - and offered up very little new for those already familiar with the story. I guess it does work better for viewers who have no idea that this extraordinary series of events even took place, but there are still some astounding revelations and dramatic turns that should fool the initiated too. It is a story that is too good to be true, and while this might seem like an obvious statement, the accounts are so cloudy that we feel like we can no longer accept what is perceived to be the truth. Manipulation is part of what makes this such an engrossing study, and the fact that something like this has taken place really is hard to process. Also, the way the film is structured, edited and scored, it rivals some of the great whodunit mysteries. It is bewildering, edge-of-your-seat entertainment.

What is fantastic about this documentary is that from the opening minutes we are introduced to Frederic Bourdin, and privileged to his recount of how he prepared to steal Nicholas' identity and managed to convince his family that he was their missing son, so the film never leaves the identity of the boy a mystery to us. Nicholas disappeared and the boy picked up by his family is not Nicholas. But, the mystery becomes so much more twisted, that we realise this is just the beginning. Frederic is welcomed home - he bears a lot of the same traits and distinguishing features, including purely by chance, a gap between his teeth - but he has a strange accent and an oddly present five o'clock shadow.

FBI Agents and PI's sensed there was something amiss, and because no DNA test had been made before Nicholas left Spain, there was really no proof of his identity, beyond the family's acceptance. They set about proving his identity. But questions start to mount. If this isn't Nicholas, then who is he? Why were the family so convinced that he was their son/brother? What actually happened to Nicholas? Was his disappearance linked to the family, and with this imposter in the house, is there light shed on the case? There are twists you will never see coming, and just imagining where this story could have gone, and how unfathomable that would have been, is enough to provoke an endless series of deliberations and discussions. Essential viewing. ★★★★★ (A)

Coming out of The Imposter Sam, Cam and I chowed down a Subway for sustenance and Sam and I headed into God Bless America. 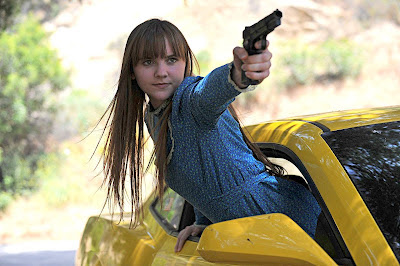 God Bless America - I don't have a lot to say about this film other than the fact that it began to rub me the wrong way after some good early laughs and scathing monologues from its protagonist, Frank (Joel Murray). This does play with my sort of humour (neurotic Larry David-esque stabs at undesirable social norms) but I found it to be misguided, repetitive, lack logic (like, really lack logic) and ultimately become bitter, merciless and hypocritical, focusing on some aspects of American politics and popular culture that were intermittently hilarious, but mostly concerning. This is especially notable for the character of Roxy (Tara Lynne Barr), the Bonnie to Frank's Clyde, who was unjustifiably a psycho. It did not feel like it was set in our world, and yet it tries to make poignant points about its current state. ★★1/2 (C+)

Following this film we met up with Cam and Lisa Malouf (@lisamalouf) and also had a quick chat with Tom, and went for drinks at a nearby bar. Though this place was rowdy and loud, we shared some good conversation and it was a fitting end to what was a mixed bag in terms of films, but a truly great day overall.
Posted by Andy Buckle at 8:45 PM