The Films of David Cronenberg Vol. #1

Seth Brundle (Jeff Goldblum), a brilliant but eccentric scientist, meets Veronica Quaife (Geena Davis), a journalist for Particle Magazine at a meet-the-press event held by Brundle's financier, Bartok Science Industries. Seth invites Veronica back to his lab and shows her a project that will change the science world as it is currently known and could win him a Nobel Prize; a set of "Telepods" that allows instantaneous teleportation of one object from one pod to another. Intrigued by his idea and believing in his abilities, if also attracted to the man, Veronic agrees to document Seth's work. Although the "Telepods" can transport inanimate objects perfectly, he had so far been unsuccessful in teleporting living creatures with flesh, horrifically realised during the failed attempt on a live baboon (which appears to be turned inside-out). 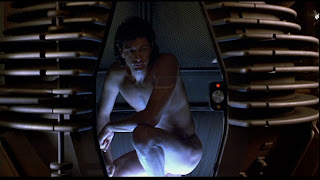 Having managed to successfully reprogram his computer system to deal with living tissue, and having finally transported a live baboon, Seth decides to test himself. His judgement, however, is significantly impaired by alcohol and a paranoid fear that veronica is secretly rekindling her relationship with her editor and former lover (John Getz). As a drunk and jealous Seth prepares to teleport himself, a common housefly slips into the pod unseen. Shortly after his teleportation, Seth exhibits what at first appear to be beneficial effects of the process - heightened senses, increased strength, stamina and sex drive. With the DNA from the fly fusing with his own, Seth soon becomes arrogant and destructive, and once he recognises the discolouration of his skin and that he has started sprouting hairs and losing fingernails, it becomes very evident that something has gone horribly wrong.

Gradually deteriorating over the next few weeks, Seth comes to realise that he is losing his human reason and compassion, and is now being driven by primitive impulses he cannot control. Veronica discovers that she is pregnant and is unsure whether fertilisation occurred before or after Seth's transformation. Though horrified by the thought of bearing Seth's child (her anxiety is beautifully captured in a creepy dream sequence) she remains sympathetic of his existence and committed to helping the now sad and desperate man she once loved and admired. Separating it from many other gore-riddled 80's horror classics, is the powerful romance at the core, which captures Seth's desperation to cling to his humanity. Widely considered to be one of the great horror films ever made, it is surely one of the greatest remakes. 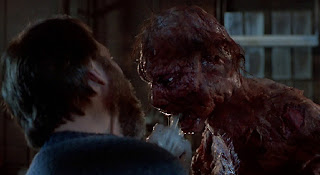 Some critics saw the film as a metaphor for the AIDS epidemic. It could be a representation for disease in general as Seth's skin becomes bruised and lumpy, his teeth fall out and he develops oozing pustules that gradually worsen. A truly tragic tale, The Fly relies on the effective performances and the chemistry between the leads, which endows this sci-fi horror with a romantic twist and a deeply affecting human drama. Jeff Goldblum, who would later be best known for his involvement in the Jurassic Park franchise, gives the finest performance of his career, while Geena Davis gives very commendable support.

The wonderful score was composed by Howard Shore, a favourite collaborator of David Cronenberg, and the superb make-up effects by Chris Walas deservedly won him an Academy Award. Cronenberg became renowned as a master of gore, and there are several stomach-churning moments once again. As one of his more complete masterpieces, he seems to effortlessly balance genres, infusing his often shocking use of gore with scientific breakthroughs, compelling performances and even some humour, while always being wary that his audience cares for the characters through a moving sense of humanity. Scanners and Videodrome are earlier Cronenberg works that I can recommend too, but The Fly is essential viewing.

Dead Ringers is a psychological horror/thriller from David Cronenberg starring Jeremy Irons in the dual role as identical twin gynecologists, Eliot and Beverly Mantle. Why the British actor was cast for a film set in Canada is puzzling. I have developed a personal dislike for Irons' performances (both here and in Adrian Lyne's Lolita), though it is still impressive dedication to tackle this difficult and controversial role. He always seems to have the same cold stare etched across his face, and often seems flummoxed and lost for words. His soft-spoken monotone is also tiring and his characters, though psychologically troubled and on-edge, are decidedly boring. Cronenberg's screenplay is based on the novel, Twins, by Bari Wood and Jack Geasland, which is loosely based on the lives of Stuart and Cyril Marcus. It is the story of twins who act as though they are one, and the woman who tore them apart. 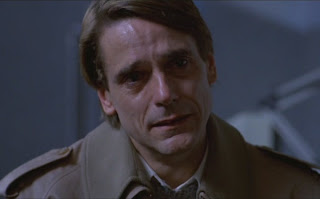 Dedicated to their professions from a young age (a facet of the story relayed in two quick sequences), the twins completed their studies and are amongst the most revolutionary gynaecologists in practice, inventing their own surgical equipment that has distanced them from their competitors. In addition to being genetically identical and impossible to tell apart, the twins also live together and share women. Eliot is the more aggressive and confident of the two and seduces women who come to the Mantle clinic. When he tires of them, the women are passed onto the shy and passive Beverly, remaining aloof to the substitution.

When Beverly becomes attached to the troubled actress Claire Niveau (Genevieve Bujold), it upsets the established equilibrium between the twins. Beverly mistakes Claire's male assistant for her lover (an important plot element that comes across as a real stretch) and comes to believe that she is cheating on him. This sends him into clinical depression, prescription drug abuse and delusions about "mutant women". He has a macabre set of surgical equipment especially designed to work on these women, but he is assigned administrative leave when he first tries to use them on a patient, and subsequently collapses from drug withdrawal. Beverly's decline directly affects Eliot, who desperately seeks a way to return their lives to normalcy.

Unlike Videodrome and The Fly, which are quite short and energetically paced, Dead Ringers is dull and laborious. While taking the time to establish the bizarre relationship between the twins and revealing the ways that they are different, it does feel stagnant at times. While there are some unsettling moments; Beverly's consideration of using those malicious tools on a patient and his clamber onto the unconscious patient for a whiff of their oxygen are especially confronting. But the unsavoury drug use, the tied up sex and the vivid dream sequence are also unnerving. In no way is Dead Ringers a horror film, nor a particularly effective thriller. It actually has no likeable features. 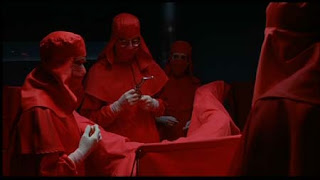 Often it is difficult to tell the twins apart, especially when they both resort to drugs. It is briefly suggested that they believe their blood streams run in synch (as disconnected siamese twins). In order for them to understand and work with one another, they have to be in control of their actions and work in synch. When Beverly, for the first time, rejects his brother's assistance, they must either find a way to reconnect, or separate forever. Eliot's decision to start using hard drugs is never really explained and the concluding consequences seem unjustified. Though it is hard not to praise Jeremy Irons' performance, Dead Ringers is overtly symbolic, dully paced, visually unappealing, and doesn't possess a single likeable character. It is a brooding, unsatisfying experience and a disappointing addition to the resume of a master director I have recently come to admire.

In Vol. #2 of the Cronenberg Marathon, I'll be reviewing Naked Lunch, Crash and eXistenZ.
Posted by Andy Buckle at 10:25 AM