This intense re-imagining of Sam Raimi’s 1981 low-budget gore-fest, The Evil Dead, which spawned two sequels and remains a cult favourite today, is the feature debut from Fede Alvarez. Raimi (Spiderman, Oz: The Great and Powerful), his Evil Dead star, Bruce Campbell, and original producer, Robert G. Tapert, remained involved to supervise this new addition to the franchise, serving as producers. 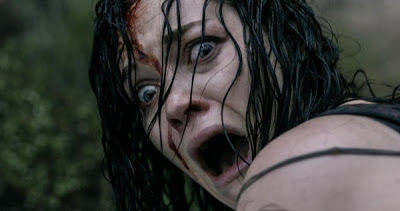 Five twenty-somethings – a brother and sister, Mia (Jane Levy, very good) and David (Shiloh Fernandez), David’s girlfriend Natalie (Elizabeth Blackmore), and Mia’s friends Eric (Lou Taylor Pucci) and Olivia (Jessica Lucas) – meet at an abandoned cabin deep in the forest. The reason: not to party, but to form an intervention to support Mia through drug withdrawal and a give her opportunity to cleanse herself from her addiction. When they discover a book titled Naturom Demonto: The Book of the Dead, irresponsibly opened by Eric, releases a demonic presence from the surrounding woods.


Continue reading at Graffiti With Punctuation.
Posted by Andy Buckle at 9:37 AM