During a raging Metallica concert, a live performance and recording by the gods of metal themselves, a young roadie named Trip (the great Dane Dehaan, star of Chronicle, The Place Beyond the Pines) is sent on a mission to catch up with a truck driver who has been disabled on the way to the arena and procure a valuable item. But when his own mode of transport is hit by another vehicle, he finds himself stranded amongst a violent riot crowd on the anarchic, desolate streets and relentlessly pursued by a masked horseman as he tries to survive and return to the stadium with the band’s missing cargo. 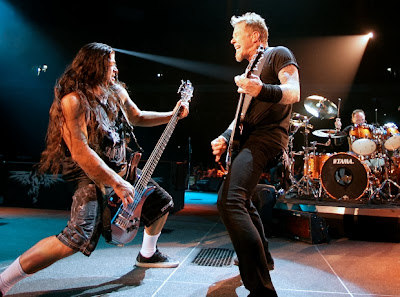 Directed by Nimrod Antal, who collaborated with Metallica (James Hetfield, Lars Ulrich, Kirk Hammett and Robert Trujillo, individually introduced in amusing fashion as we follow Trip’s VIP backstage entrance) on the screenplay, Metallica: Through the Never is an exhilarating and cinematic 3D concert film with a tense narrative accompaniment. This is truly a treat for fans. Probably just fans, but that’s who this film was made for after all. The band’s performance is exemplary, their grand stage takes on an amazing evolution, and the stylish and inventive visuals transport you into the building.


Continue reading at Graffiti With Punctuation.
Posted by Andy Buckle at 6:42 AM