If your most precious treasure, your child, suddenly disappeared without a trace and was feared dead, how far would you go to rescue them and ensure that justice is served to whoever is responsible? If the situation warranted it, would you supersede the law and be willing to cross the line in a cruel and immoral quest for the truth? This conflict is at the very core of Prisoners, a bleak and unsettling, but completely absorbing crime thriller directed by great Canadian filmmaker, Denis Villeneuve (Maelstrom, Incendies), and written by Aaron Guzikowski. 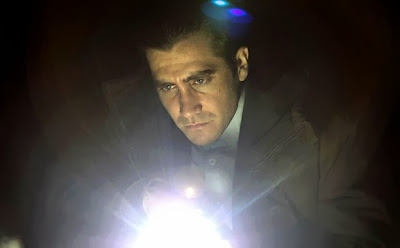 It covers the week following the disappearance of two young girls, focusing predominantly on Keller Dover (Hugh Jackman), the distraught father of one who psychologically unravels in wake of the incident, and the dedicated, highly competent lead detective, Loki (Jake Gyllenhaal), a loner with a dark past and an impeccable record.

Following their disappearance from the home of Keller’s friends (Terrence Howard and Viola Davis), the first lead is a dilapidated RV that had been seen parked on their street earlier in the day, but the mentally simple driver who is arrested, Alex Jones (Paul Dano), is eventually let go because of insufficient evidence.

Keller, who works in construction and is a man seemingly prepared for anything, becomes quickly frustrated by the police’s inability to hold their only suspect, and is unconvinced that Alex is innocent. While he is taking the situation into his own hands, and raising suspicion along the way, Loki conducts his investigation, finding himself caught in a frustrating maze full of loose ends. With time running out and very little making sense, Loki too begins to break. There are many layers of development in this film – most are unexpected, and shouldn’t be discussed here – but Prisoners is a terrific thriller. For 159 minutes it never relinquishes its grip on the audience.


Continue reading at Graffiti With Punctuation.
Posted by Andy Buckle at 9:11 AM