In cinemas this week: 22 Jump Street, How To Train Your Dragon 2, The Two Faces of January, Frank, Galore, Gabrielle and Ernest and Celestine. 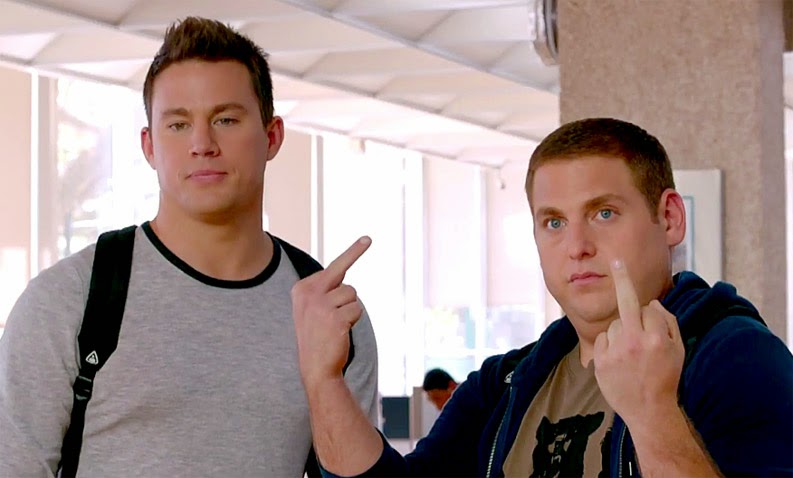 22 Jump Street - After making their way through high school (twice), big changes are in store for officers Schmidt (Jonah Hill) and Jenko (Channing Tatum) when they go deep undercover at a local college. But when Jenko meets a kindred spirit on the football team, and Schmidt infiltrates the bohemian art major scene, they begin to question their partnership. Now they don't have to just crack the case - they have to figure out if they can have a mature relationship. If these two overgrown adolescents can grow from freshmen into real men, college might be the best thing that ever happened to them. Review by Blake is Batman, Graffiti With Punctuation.

How To Train Your Dragon 2 - DreamWorks Animation returns to the world of dragons and Vikings in this sequel to their successful 2010 outing How to Train Your Dragon. The original film followed the exploits of a Viking chief's son, who must capture a dragon in order to mark his passage into manhood and prove his worthiness to the tribe. Review by Sam McCosh, An Online Universe.

The Two Faces of January - Suspense thriller starring Academy Award nominee Viggo Mortensen, Golden Globe nominee and Cannes Best Actress winner Kirsten Dunst and Oscar Isaac. It is based on the novel of the same name by Patricia Highsmith (The Talented Mr. Ripley, Strangers on a Train), and adapted by Academy Award nominee Hossein Amini (Drive, The Wings of the Dove). The film is Amini's directorial debut. In 1962, a well-heeled couple (Mortensen and Dunst) come to know an American expatriate acting as an Athens tour guide (Isaac). But an incident at the couple's hotel puts all three in danger and creates a precarious interdependence between them. A tense and dangerous battle of wits between the two men leads them from Greece to Turkey, and to a dramatic finale played out in the back alleys of Istanbul's Grand Bazaar.

Frank - A comedy about a young wannabe musician, Jon, who discovers he's bitten off more than he can chew when he joins a band of eccentric pop musicians led by the mysterious and enigmatic Frank and his terrifying sidekick, Clara. Frank's uniqueness lies in the fact that he makes music purely for the joy of creating and because he wears a giant fake head. After a rocky start, Jon ingratiates himself with the band, and they retreat to a cabin in the woods to record an album. As his influence waxes, creative tensions mount and the band's entire raison d'être is called into question. Review by Nick Brodie, Graffiti With Punctuation.

Galore - At 17, love is as big as life is immense. It's a sweltering summer before the final year of school and Billie and Laura share every secret except for Billie's biggest secret - she's crazy in love and sleeping with Laura's boyfriend Danny. When Billie's social worker mum takes in Isaac, a troubled teenager looking to get his life straight, the delicate balance of the three friends' lives is disrupted. As bushfires threaten the edge of their suburbs and they immerse themselves in the swirl of parties, possible love and the intensity of sex and desire, the world of the four teenagers is changed forever as their secrets are revealed and their lives, friendships and loves are thrown into chaos.

Gabrielle - The musically gifted but developmentally challenged Gabrielle lives in a group home with four other adults who have similar disabilities. Like all young women, Gabrielle wants her independence, but of course her situation is exceptional. When she falls in love with a similarly challenged young man in her choir, she discovers that both the families and the social workers are alarmed; can these two handle an adult relationship? Then Gabrielle's beloved and supportive sister confesses that she is going to move to India, and Gabrielle's world is truly in danger of falling apart. With stubborn courage and a real zest for life, Gabrielle prevails against all odds to win her freedom.

Ernest and Celestine - Deep below snowy, cobblestone streets, tucked away in networks of winding subterranean tunnels, lives a civilization of hardworking mice, terrified of the bears who live above ground. Unlike her fellow mice, Celestine is an artist and a dreamer - and when she nearly ends up as breakfast for ursine troubadour Ernest, the two form an unlikely bond. But it isn't long before their friendship is put on trial by their respective bear-fearing and mice-eating communities. Fresh from standing ovations at Cannes and Toronto Ernest and Celestine joyfully leaps across genres and influences to capture the kinetic, limitless possibilities of animated storytelling. Like a gorgeous watercolor painting brought to life, a constantly shifting pastel color palette bursts and drips across the screen, while wonderful storytelling and brilliant comic timing draw up influences as varied as Buster Keaton, Bugs Bunny and the outlaw romanticism of Bonnie and Clyde. Bringing it all together is the on-screen chemistry between the two lead characters - a flowing, tender and playful rapport that will put a smile on your face and make your heart glow. Based on the classic Belgian book series by Gabrielle Vincent, Ernest and Celestine is winner of the Cesar Award for Best Animated Feature and numerous festival prizes.


Weekly Recommendation: A big week. I want to see all of these, but it is unlikely I will find the time. 22 Jump Street has been receiving very strong reviews, and most claim it to be better than the first film. Frank was one of the most buzzed about films from Sundance, and Sydney Film Festival reviews have been full of praise. If there was ever a film I desired a sequel to, it is How To Train Your Dragon. While I understand that it is much darker than the predecessor, I can't miss it. All of these films are going to be worth a look, but it all depends on their accessibility.
Posted by Andy Buckle at 6:35 PM