Edge of Tomorrow is Doug Liman’s (The Bourne Identity, Mr and Mrs Smith) Groundhog Day meets Aliens, and it is a successful and thoroughly entertaining collaboration of these genre classics. Jake Gyllenhaal’s repeated attempts to find a bomber on a Chicago commuter train in Duncan Jones’ Source Code also bears a resemblance to the loop Tom Cruise’s character finds himself in as he attempts to win a war against a destructive alien invader. 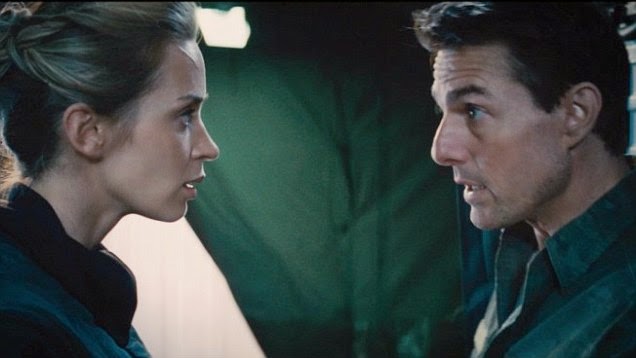 Dante Harper’s early version of the script, an adaptation of All You Need Is Kill by Hiroshi Sakurazaka, was listed on the 2010 edition of The Black List, but went through several collaborated revisions by Jez and John-Henry Butterworth and Christopher McQuarrie (The Usual Suspects) on the way to the screen. Despite the aforementioned derivations, this is one of the few big budget projects so far this year to feel fresh and possess the potential to surprise. Liman knows the ingredients of the summer blockbuster, and his thoughtful film strikes a compelling balance of high-stakes action spectacle, character-driven drama and timely injections of humour to ensure that its clever concept never wears out its welcome.

An alien race, nicknamed “Mimics” for their ability to replicate and respond to military combat strategies, has invaded the Earth and has taken over most of Western Europe. Humanity has begun to turn the tide of the struggle, with the creation of advanced combat suits and weaponry, and are driven by the inspiring victories led by Special Forces soldier Rita Vrataski (Emily Blunt). An assault has been planned for the coast of France, with a successful result expected. General Brigham (Brendan Gleeson) orders Major William Cage (Tom Cruise), a paper-pushing high-level military media consultant, to be at the front. But having never been trained for combat, he resists. Forcibly, he finds himself a member of J Squad under Sergeant Farrell (Bill Paxton), and on the frontlines for the assault.


Continue reading at Graffiti With Punctuation.
Posted by Andy Buckle at 6:30 PM