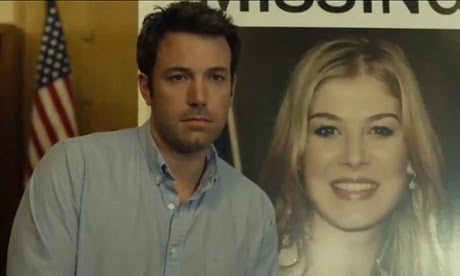 Gone Girl - Directed by David Fincher and based upon the global bestseller by Gillian Flynn - unearths the secrets at the heart of a modern marriage. On the occasion of his fifth wedding anniversary, Nick Dunne (Ben Affleck) reports that his beautiful wife, Amy (Rosamund Pike), has gone missing. Under pressure from the police and a growing media frenzy, Nick's portrait of a blissful union begins to crumble. Soon his lies, deceits and strange behavior have everyone asking the same dark question: Did Nick Dunne kill his wife?

Obvious Child - For aspiring comedian Donna Stern, everyday life as a female twenty-something provides ample material for her incredibly relatable brand of humor. But when Donna gets dumped, loses her job, and finds herself pregnant just in time for Valentine's Day, she has to navigate the murky waters of independent adulthood for the first time. As she grapples with an uncertain financial future, an unwanted pregnancy, and a surprising new suitor, Donna begins to discover that the most terrifying thing about adulthood isn't facing it all on her own. It's allowing herself to accept the support and love of others. And be truly vulnerable.

Annabelle - Before The Conjuring, there was Annabelle. A prequel to The Conjuring, which was pretty great but features none of the cast or crew of that film.

Advanced Style - Street style photographer Ari Seth Cohen and director Lina Plioplyte dive into the personal lives of New York City's most fashionable women over 60. In an industry obsessed with youth, these older women dispel conventional ideas about beauty and aging and prove that with age comes grace, confidence, boldness, flair and new, unimagined opportunities for fame and fortune.


Weekly recommendation: Umm..Gone Girl. New David Fincher, baby (*I've been watching too much Entourage*). Also, I have heard good things about Obvious Child from MIFF, so it is great to see it out on limited release.
Posted by Andy Buckle at 8:05 AM