When Tobin Frost (Denzel Washington), a rouge and wanted ex-CIA fugitive, is picked up entering the United States consulate in South Africa, he is transferred to a CIA-operated safe house for rigorous interrogation. The facility's young and inexperienced house sitter, Matt Weston (Ryan Reynolds), escapes with Frost in his custody when the house is infiltrated by heavily armed mercenaries, and they are forced to make their way to a new CIA-assigned location. Battling their own contradicting agendas, they are forced to team up to fight off their pursuers and protect a file containing incriminating evidence about the world's leading Intelligence Agencies. As his CIA superiors scramble to help Matt, he is forced to take the initiative himself, making personal and moral sacrifices along the way, and finding in Frost a heady veteran mentor. 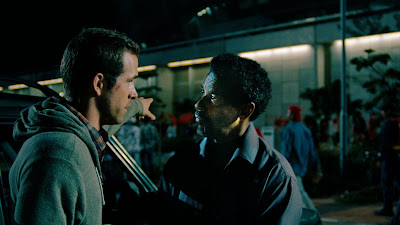 Safe House is actually directed by Daniel Espinosa, but one could be forgiven for thinking that this film is the work of Tony Scott (and not just because it stars Denzel Washington). The film's aesthetic is very evidently influenced by the Bourne films too, with the kinetic, shaky-cam photography making most of the action sequences a bit of an endurance test (but remaining decipherable enough), and rapid editing. Thankfully, these sequences were quite well done, especially an impressive car chase sequence that is sure to get the heart pounding.

With a constantly evolving action repertoire (car chases, machine-gun battles, intense hand-to-hand skirmishes, and foot pursuits) it was quite exciting there for a while, but rarely was it engaging, because the script doesn't allow us any time to care for these characters. There were some complex manoeuvres that really worked and the clever editing ensured continuity remained when it could have easily been lost or cheated. The actors also seemed like they were genuinely hurting one another, which is a credit to them. There is more than one occasion where Ryan Reynolds during a skirmish, is fighting off an opponent wielding a sharp-object. But, unfortunately, Tony Scott's influence is evident too. There is the same gritty look about the picture's quality and that same yellow/orange filter he loves to use. It also possesses a groan-inducing screenplay fit for a Scott film - nonsensical, predictable, full of cliches and ultimately pointless. In short, an unoriginal one. 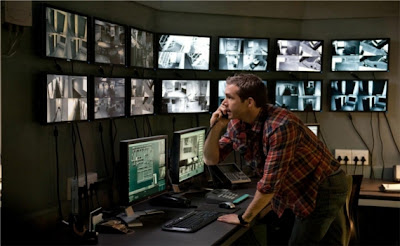 Essentially, Safe House is a chase film. Weston and Frost are trying to make their way across South Africa to the next arranged safe house, laying low and staying off the grid as best they can. Locating a GPS, which would assist Weston in locating the residence, takes the pair to a football stadium, where there is a game underway. It really felt like the filmmakers thought it would be cool to include the stadium at some point in the story - making great use of a money shot of Weston walking through the crowd with the game underway in the background. But at every turn the same group of heavily armed soldiers turns up to intercept them. We know that Frost is in the possession of something valuable - incriminating intelligence - and Weston, while trying to keep Frost his captor also finds himself in the firing line. While it seems like they become allies, their agendas are cloudy, with each one ready to turn on the other at any chance they get. I guess this is one admirable feature about the script. Weston has no intention of letting Frost go and wants to prove himself by bringing him in alive, while Frost, on several occasions (including during the high-speed pursuit - which almost undermined the whole sequence) tries to escape - and shows no remorse leaving Weston beaten and fending for himself.

The characters are wafer thin, and before we really know who's who we are asked to feel pity for Washington's character during a very early torture sequence. I didn't feel anything at that point and considering the film was almost two hours (significantly overlong) there was no feeling of suspense. It's not like he was going to die. Frost's rouge past and the reasons why he is a wanted man are literally read out to us off a giant screen, where Frost's file is displayed - and that's about all we need to know. He's a bad guy that needs to be brought in. The CIA team comprised of Sam Shepard, Vera Farmiga and Brendan Gleeson, who are given nothing to do and spend most of the film arguing in a stuffy room and talking on the phone, want to find out why Frost suddenly checked himself into the U.S consulate, when he has been evading contact for so long. We aren't really sure ourselves, but because a shady deal was made between Frost and an MI6 Agent (Liam Cunningham) we assume that is the reason. All of a sudden mercenaries are everywhere and this becomes the main mystery: who are these guys, and why do they keep appearing in full force wherever Frost and Weston are hiding, even though many of them were taken down in the last shootout? 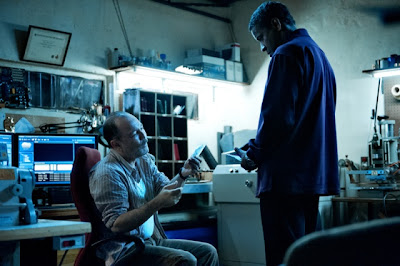 It seems like someone in the CIA doesn't want the intelligence getting released - but which of the three suspects could it be? Once Weston gets involved, and proves that he has incredible driving skills for a guy who has done nothing but guard a safe house for the last 12 months, Sam Shepard exasperatedly orders his team to "find out everything they can on Weston". This prompts the same team member to then read out Weston's profile off the 'big board' and he becomes the last remaining good guy, and the CIA's only chance. Look, it seems like I have offered few reasons to see this film, but it honestly isn't that bad. The action is relentless (and at times brutal) and Reynolds and Washington are actually quite solid. The former, especially, was convincing given the physicality of the role. Curiously, like Killer Elite, there is a romantic subplot where the endangered girlfriend is prompted to hide out in Paris. Strange. Ultimately, after everything that happens Safe House is a film that is far too easy to forget, but hardcore action junkies will find it worth their time.