This Means War is distributed through 20th Century Fox and has a scheduled release in Australian cinemas on February 14.

This Means War, distributed through 20th Century Fox, is the new film from McG (Charlie's Angels, Terminator: Salvation), written by Timothy Dowling and Simon Kinberg. Two CIA operatives, inseparable partners and best friends, Tuck (Tom Hardy) and FDR (Chris Pine), are grounded to desk work following a botched covert operation and soon discover that they have both started dating the same woman. That woman is Lauren Scott (Reese Witherspoon), an unlucky-in-love workaholic who is convinced by her sex-crazed best friend to try online dating, where she agrees to meet Tuck. Things go well on their first date, until she runs into FDR later in the night at a video store, setting in motion a series of elaborate schemes between the pair (who have agreed on some battle grounds), which ultimately effects both their professional and personal lives. With neither one letting up, they decide to employ their incomparable skills and an endless array of high-tech gadgetry to one-up the other – while trying to keep their friendship a secret from their indifferent and emotionally torn target. 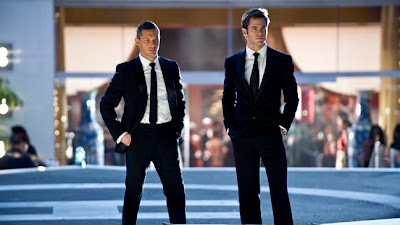 The premise fueling This Means War is undeniably ridiculous, and there are some stupefying moments littered throughout McG’s film, but in the end, this isn’t a film trying to provide audiences with anything deep and meaningful, simply to exist as nothing more than light, fun, brainless Friday night entertainment – and because it has a scheduled release on Valentine’s Day – a great date movie. The attractive cast will draw a lot of people to the cinema, and a lot of people will be satisfyingly entertained, and I can certainly see why. For that reason, I think this film scrapes through with a pass.

This Means War is not a good film. The action sequences aren’t particularly exciting and considering that they are a pair of Federal Agents, their case (tracking down Til Schweiger’s generic ‘villain’) has almost no bearing on the story until he conveniently turns up at the end. All of their time and resources has been spent surveying Lauren and each other. There also seems to be no concept of time in this film, because at one point Lauren decides that she will decide which guy she likes better within a week. Well, a significant time later in the film, after countless elaborate dates, this week she mentions still doesn’t seem to have elapsed. Considering that these guys are also meant to be busy at work you wonder how they find the time to fit everything in. Incredibly, Tuck’s first date is a trip to a fun-fair, which culminates in a gymnastics routine in an empty circus tent, while FDR tracks down a gallery full of work by Lauren’s favourite artist and even adopts a dog. Watching Tom Hardy take down a group of kids in a paintball match was pretty funny, however. 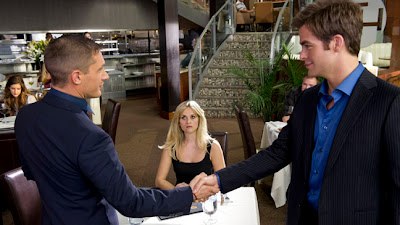 I think Chris Pine, who has this air of scumbag entitlement and carefree confidence, was well suited to the role. Actually, it required some of the arrogance he brought so effectively to Star Trek. Tom Hardy, on the other hand, shouldn't be suited to a film like this, but he manages to makes it work somehow. He has shown off his comedic chops in Bronson and Inception, but he has mostly made a name for himself by being a brooding tough guy. The pair have quite a good chemistry - and the film's success relies on this. Reese Witherspoon wasn't as annoying as usual, while Chelsea Handler, playing Lauren’s lewd and fast-talking friend, is intermittently funny, supplying Lauren with woeful dating advice throughout the film.
Due to the way that both men create elaborate schemes to win over this woman, it is never really clear that either of them has any feelings for her, but seemingly just desire to win her over for bragging rights. It becomes a competition, rather than a pursuit of love. Reese Witherspoon, advised to surrender herself to their attempts, is also playing a game – going against her conscience and using both of them for fun. Beneath the surface there is actually some very cruel manipulation, and the fact that Lauren chooses to decide through a sex tiebreaker is in pretty bad taste. It all comes down to the sex – and this is what ultimately also splits the friends apart.
The more one thinks into this film (below the surface humour and the stars’ allure), the more obvious the flaws are. This Means War is actually diabolically written and directed, but praise must go out to the lighting – and the special feature used to touch up the performers’ blue eyes. They all seem to sparkle. When you are in the cinema, you aren’t really caring about the film’s shortcoming and overall ludicrousness. The cast all seems to be having a good time and admittedly, there are some guilty laughs.

You don’t question why the three have enormous and beautiful apartments, you don’t question how Tuck and FDR manage to so easily use Federal resources for their own personal surveillance. Things just happen - Tuck’s apartment is flooded at one point, and the pair end up wrestling in a restaurant and completely destroy the place - and the consequences are never explained. I threw my hands up in the air when the climactic high-speed pursuit ends up on an undeveloped part of the highway. Seriously. It is all very predictable, and most viewers will guess whom Lauren chooses and how everything is resolved, a long way out.
But, as I said, this is popcorn entertainment, and in the end, it is not a bad way to spend 90 minutes - especially if you leave your brain at the door and don't expect to be intellectually stimulated. I'm going to assume most people will be drawn to this film because of the good looking cast, and well, Reese Witherspoon has long been the victim of some poor role choices, but Pine and especially Hardy (who is a big deal at the moment, and set to star in The Dark Knight Rises and John Hillcoat's highly anticipated new film later in the year) get through with their dignity still intact. As a viewer, you just might too.