Review: How to Train Your Dragon (Chris Sanders, Dean DeBlois, 2010) 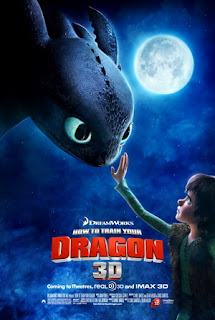 How to Train Your Dragon, the computer-animated fantasy adventure from Dreamworks Animation stands as one of the most memorable family film experiences of the year, and is the greatest film I have seen released by Dreamworks, whose resume notably includes ANTZ (1998), Shrek (2001) and Kung-Fu Panda (2008). Released in theaters in Digital 3D a week before Clash of the Titans, it suffered at the box office in its early weeks, but fueled by critical acclaim became a success, making more money than every Dreamwork's release that isn't a Shrek film. I missed it at the cinema, so I haven't seen it in 3D, so I can only imagine how incredible the visuals would have been.
How to Train Your Dragon is a rousing emotional comedy/drama set upon a mythical Viking island called Berk where a young and bumbling viking teenager, Hiccup (voiced by Jay Baruchel) wishes to follow in his tribes tradition of being a vicious dragon slayer. Their island is plagued by devastating dragon attacks who raid their livestock and destroy their homes, and despite attempts by the chief viking Stoick (voiced by Gerard Butler) to locate their elusive lair and end the problem, they remain at risk. Hiccup wishes to impress his father and prove himself so he sets about building contraptions used to kill or capture dragons, and during the opening sequence, a mesmerizing attack on the island, Hiccup manages to capture the elusive Night Fury. Instead of killing the dragon, however, he frees it from its bonds, fixes it's damaged tail and befriends it. He builds a makeshift wing and riding assembly, allowing him to guide the dragon (he names it Toothless) in free flight. At the same time he is signed up to participate in the Dragon killing academy, where he proves to be the most successful in controlling the dragons, having learned a great deal from his time with Toothless. He becomes both the source of popularity and envy within the group, and subsequently must kill a dragon to complete his training. Having discovered that the dragons are misunderstood creatures and steal the Viking livestock out of necessity to feed an even larger creature residing beneath their lair, Hiccup refuses to kill the dragon and wishes to make the tribe aware that their opinions are completely wrong. This angers his father, who captures Toothless and begins an all-out assault on the lair. Hiccup and his academy friends, with the help of some trusting dragons held captive at the ring, pursue the boats to halt his father's mistake.

The personal story, while the central theme is the typical coming-of-age element, has some surprising emotional depth. Striving for recognition and praise, Hiccup seeks to impress his domineering father and ultimately get the girl (Astrid, voiced by America Ferrera). He bonds with the Night Fury like it is a pet, and it is both charming and heartwarming to see how much they care for one another by the end. The war between the dragons and the vikings is also somewhat savage and violent, with genocide of the dragon race contemplated throughout. I was surprised by how violent it was actually, some of the attacks are brutal, and most of the dragons are far too scary for very young children. While it is humorous at times, and I really thought Jay Baruchel's sarcastic voice performance as Hiccup was often hilarious, it's mostly quite a sad tale. But the script is intelligent and touching. The conclusion has an emotional kick in the guts that leaves you overwhelmed for a few moments, much like the film's major competitor for Best Animated Feature, Toy Story 3. The voice cast was exceptional, as was the rousing score composition by John Powell. The sweeping cinematography and the animated visuals were stimulating and complex. The spatial depth captured throughout is astonishing, made even more incredible in 3D I would assume. I really thought that Avatar (which is a technical marvel itself) could have even learned a thing or two from the flight sequences here, and the Kraken in Clash of the Titans was really disappointing in comparison to the enormous dragon unleashed at the stunning climax. Much like 2009, this is a strong year for animated films, well with the exception of the hugely overrated Despicable Me, and along with Toy Story 3 and the soon-to-be-released Tangled, How to Train Your Dragon is amongst the very best recent examples of the genre.