Eyes Without A Face is a declared classic blend of police procedural and mad scientist-driven body horror from French director Georges Franju. It is an adaptation of Jean Redon's novel of the same name and didn't receive a release in the United States until 1962. This version was dubbed, edited and titled The Horror Chamber of Dr. Faustus. 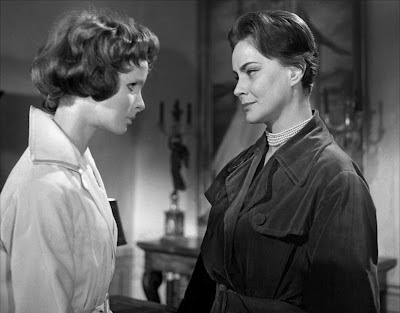 Master surgeon Dr. Genessier (Pierre Brasseur), feeling guilty about his role in his daughter Christiane’s (Edith Scob) facial disfigurement – one she is forced to hide under a fitted mask - enlists his assistant, Louise (Alida Valli), to kidnap pretty young women who resemble Christiane. His aim: to attempt a transfer of their face onto his daughter’s.
The film opens at night just outside Paris with Louise driving to a riverbank and dumping a corpse into the river. This body is later identified by Dr. Genessier as his recently missing daughter, believed to have committed suicide as a result of her disfigurement. The body in fact belongs to a young woman that died after Genessier's unsuccessful attempt to graft her face onto his daughter's. Christiane is being held at his mansion - located adjacent to his medical clinic.
The film tracks both Genessier's fate following another failure to fix his daughter - this time he effectively grafts the face of another young woman, Edna (Juliette Mayniel), but Christiane's body ultimately rejects it - and his daughter's coming-to-terms with her existence as nothing more than a human guinea pig and choosing to reject her father's help just as her body does the transplants.
I can imagine this film provoking plenty of controversy on release. The film's premise is certainly a sordid one and not unlike the premise of Pedro Almodovar's latest masterpiece The Skin I Live In. It contains a lengthy and gruesome surgical sequence that would have disgusted audiences at the time. Despite addressing some interesting themes, and offering up a few thrills, I felt like the film was too reliant on this aforementioned sequence and was sorely lacking in tension. Especially the climax. 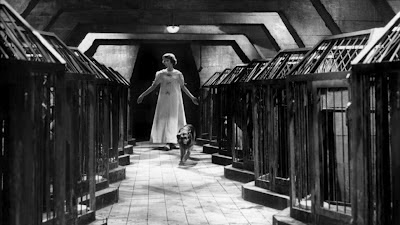 It is clear that Genessier is aware of his crimes - admitting "to do a lot of wrong to perform this miracle" - but we get the sense that his motivations aren't entirely about appeasing his guilt and fixing his daughter, whom he treats just like the dogs he has locked in cages and uses as subjects for experiments. In fact, it does seem like he has his eyes set on the fame and monetary value of having achieved such a feat.
Christiane, horrified by her appearance following the accident and unable to look at herself, seems to relinquish her doubts about her father's method when she reveals her face to Edna whom, with the chloroform wearing off, screams in horror at the sight of her. Later, once the procedure is believed to be a success, Christiane claims that she doesn't feel like herself. She can't stand the knowledge that she's responsible for Edna's disfigurement, and wants Louise to kill her to put her out of her misery.
It is the dual tales of Christiane and her father's misguided well meaning that were the strongest for me. It is a little unclear whose story we are following, because each are given equal screen time, but with the moody, dreamy, fairytale-esque atmosphere and the long casting shadows there is more than an inkling of German Expressionist influence. The score is chillingly effective early and then has less impact later in the film, while the photography is clean if unspectacular. Edith Scob gives perhaps the best performance, evoking genuine sympathy and building a heroine we hope makes it and whom we hope will eventually accept who she is. 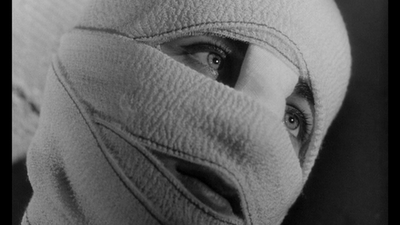 Genessier and Louise have been targeting young blue-eyed women and just as Inspector Parot (Alexandre Rignault) is contemplating the case, an associate is questioning a shoplifter possessing similar features. They let her go but Parot instructs his colleague to take down her address. "It might prove to be important," he says. Well, later in the film this woman is called upon to assist with their investigation. This period of the film seems excessively long - and not particularly engaging - considering the film's brevity.
Overall, I enjoyed Eyes Without A Face, but with the exception of the surprising presence of gore in the main surgical sequence, which still has the capacity to shock, I found this chiller underwhelming. It certainly doesn't match the work of someone like Clouzot and Les Diaboliques, but it has proven to be of considerable influence within the genre and for this reason is worth a look.
Posted by Andy Buckle at 11:25 PM