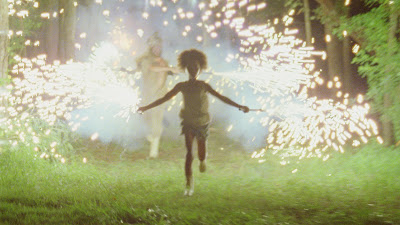 There are four new releases in cinemas this week and unfortunately, with the exception of Beasts of the Southern Wild, which I greatly admire but was not as moved by as some reviewers, it is a poor week. We have a pair of new franchise installments, Madagascar: Europe's Most Wanted and Resident Evil: Retribution and the poorly-received gross-out/alien-invasion comedy, The Watch, starring Ben Stiller, Vince Vaughn, Jonah Hill and Richard Ayoade, one is counting the days until Looper.
Beasts of the Southern Wild - In a forgotten but defiant bayou community cut off from the rest of the world by a sprawling levee, a six-year-old girl exists on the brink of orphanhood. Buoyed by her childish optimism and extraordinary imagination, she believes that the natural world is in balance with the universe until a fierce storm changes her reality. Desperate to repair the structure of her world in order to save her ailing father and sinking home, this tiny hero must learn to survive unstoppable catastrophes of epic proportions.
Madagascar: Europe's Most Wanted - Alex the Lion, Marty the Zebra, Gloria the Hippo, and Melman the Giraffe are still fighting to get home to their beloved Big Apple and of course, King Julien, Maurice and the Penguins are all along for the comedic adventure. Their journey takes them through Europe where they find the perfect cover: a traveling circus, which they reinvent - Madagascar style.
The Watch - Four everyday suburban guys come together as an excuse to escape their humdrum lives one night a week. But when they accidentally discover that their town has become overrun with aliens posing as ordinary suburbanites, they have no choice but to save their neighborhood -- and the world -- from total extermination.
Resident Evil: Retribution - The Umbrella Corporation's deadly T-virus continues to ravage the Earth, transforming the global population into legions of the flesh eating Undead. The human race's last and only hope, Alice (Milla Jovovich), awakens in the heart of Umbrella's most clandestine operations facility and unveils more of her mysterious past as she delves further into the complex. Without a safe haven, Alice continues to hunt those responsible for the outbreak; a chase that takes her from Tokyo to New York, Washington, D.C. and Moscow, culminating in a mind-blowing revelation that will force her to rethink everything that she once thought to be true. Aided by newfound allies and familiar friends, Alice must fight to survive long enough to escape a hostile world on the brink of oblivion. The countdown has begun.
Weekly Recommendation: Beasts of the Southern Wild, for exhilarating originality, world building and the performances alone, is worth a look. I feel it will prove to be divisive, however. Madagascar has received relatively positive reviews, so if you're a fan of the others, I imagine it is worth a look. Also, Damsels In Distress, released last week in Melbourne, hits Dendy Newtown this week. I'll be there. Top picks this week, however, are Monsieur Lazhar and Your Sister's Sister.
Posted by Andy Buckle at 1:17 PM