Killing Them Softly, distributed through Hoyts Distribution, has a national release October 11.

Killing Them Softly, Andrew Dominik's follow-up to his 2007 masterwork, The Assassination of Jesse James By the Coward Robert Ford, screened in competition for the Palme d'Or at the 2012 Cannes Film Festival. This gun-toting crime noir about bad men fueled by nothing but the desire for money and reputation is as grimy as could possibly be. But it also has intervals of stylish, bloody violence, sharp dialogue, entertaining black humour and courtesy of Dominik's screenplay, an adaptation of George V. Higgins' 1974 novel, Cogan's Trade, the story has been shifted to the contemporary day - the 2008 presidential election and financial crisis - with a political and national economic subtext. 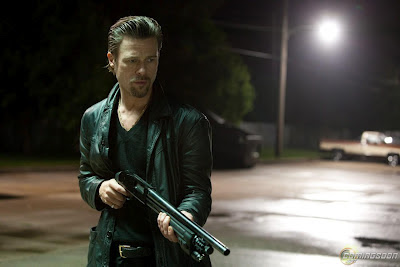 Two hapless criminals in search of a quick buck, Frankie (Scott McNairy, Monsters) and Russell (Ben Mendelsohn, Animal Kingdom), are brought in by Johnny Amato (Vincent Curatola, The Sopranos), an in-and-out of prison wannabe big shot, who has hatched a plan to rob a mob protected poker game. Markie Trattman (Ray Liotta, Narc), in charge of the games, has ripped off them off before and Amato figures the criminal world will assume it's him. Following the robbery, which cripples the local criminal economy, just like the Wall Street CEOs cripple the nation's, a street-smart enforcer named Jackie Cogan (Brad Pitt, Moneyball) is hired to investigate the heist and eliminate those responsible.

Trattman, whether he orchestrated this robbery or not, needs to be made an example of or the games will never again commence, but when Russell runs his mouth off, Cogan's attention is soon directed to the three responsible. Along the way he has car-set rendezvous with a go-between (Richard Jenkins, The Visitor) and enlists the help of several acquaintances (including James Gandolfini's once-ruthless hit man brought in from New York, who is now pleasure-seeking, sloppy and physically and mentally inept) who prove to be just as incompetent as the heroes he's investigating. 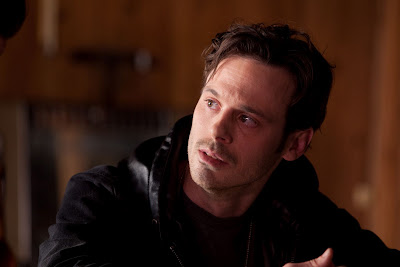 What is admirable about Dominik's vision here is that he has tried to make a film that is more than a gangster noir about violent hit men. It has a rich political subtext. Perhaps the feature that disappointed me the most about Killing Them Softly - and during the film I couldn't quite place why I wasn't enjoying the film as much as I felt I should be - was the running commentary of news bulletins relaying the election progress and speeches from soon-to-become President Obama about the economic recession and the uniting of the American people. Dominik's commentary certainly isn't subtle (perhaps too in-your-face), conveyed in both audio and visual form consistently throughout the film. Just as the rest of America is stuck in an economic crisis, the criminal underworld is too. Okay, we get it.

It was the fantastic final sequence, however, which cemented how all this political chatter tied into the film's narrative. As Cogan claims, America is not made up of a collective group of people, but of individuals. Much like the gangsters who earn their keep and build their reputation by betting in high-stakes poker games, robbing and killing one another, dog-napping and selling drugs, the Nation's politicians are individuals and take personal gambles too. If America is a business, as Cogan claims, then business sure is dirty. 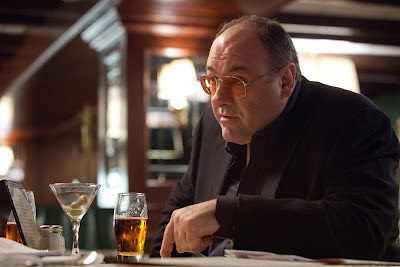 Killing Them Softly moves at its own pace, and scenes unravel without any sense of rush. The conversations take witty detours through banter, stories from the past are reflected on and the characters often seem to be on different wavelengths before getting to the point of their meeting. These conversations rather than bog down the story, actually work to develop character and establish context and relationship, which is a credit to Dominik's writing. It is interesting to note that many sequences - and the robbery is a good example - play out in real time. The story is relatively simple, but Dominik, privileged with creative freedom to tell his story in his own way, ensures every sequence is engaging.

Brad Pitt (also credited as a producer), who has previously worked with Dominik on Jesse James, delivers another performance worthy of his star potential. In my opinion Brad Pitt has always been on his game but over the last twelve months, with Tree of Life, Moneyball (Oscar nominated) and now Killing Them Softly, he continues to mature as an actor and command the screen whenever he is present. His frustration at the ineptitude of the men he is hired to investigate and utilise is written all over his face, and he brilliantly switches between warm charm and cold menace without hesitation. 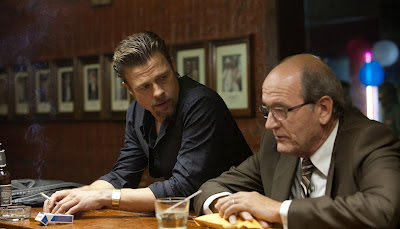 Also impressive is Scoot McNairy, a bumbling small-time semi-professional who picks the wrong partner and finds himself out of his depth. His work alongside Pitt in one particular bar sequence is outstanding. The rest of the cast are also strong - with Richard Jenkins proving to be as reliable as always and James Gandolfini creating a character reminiscent of the dark side of Tony Soprano. Ray Liotta cops one of the most horrific beatings I have seen in a long time. Mention must also go to Ben Mendolsohn for his despicable, filthy, slime ball character. The relentlessly drugged-up, sweating, foul-mouthed lowlife is uncomfortable to watch. We are even taken inside his heroin-haze with some first-person fade ins and outs. He botches his only professional moment (immense poise during the suspenseful robbery) with blabbermouth antics that bring down the whole sting.

There are several sequences in Killing Them Softly that are feats of design and style (a hit that makes extraordinary use of slow-motion for example) and the photography is, for the most part, damn fine work. Oh boy, is it violent at times. It is a grueling, barely-watchable ass-kicker. Some use of music - especially the Johnny Cash accompanied introduction to Pitt's character - is effective, but there are others that are equally uninspired. Overall, there are few features that stop this short of being truly great, but in the realm of the genre, Dominik has offered up something odd and unique. With an awesome ensemble cast, headlined by Pitt, this hard-hitting gangster flick packs a punch, and though going about it in a heavy-handed way at times, has plenty to say.