Bryan Singer (The Usual Suspects, X-Men), working with a team of screenwriters (including regular collaborator Christopher McQuarrie, Jack Reacher), brings to the screen a new mammoth-budget 3D version of the fairy tales ‘Jack the Giant Killer’ and ‘Jack and the Beanstalk’. With battle sequences too violent for the little kids and a story far too silly to keep adults interested; Jack the Giant Slayer is likely to suffer from no-mans-land marketing odds. 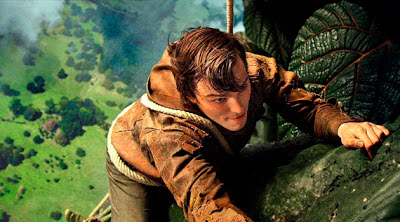 Having been in various stages of development since 2005, it tells the familiar story of the farm boy, played by Nicholas Hoult (A Single Man, Warm Bodies), who acquires giant beanstalk-sprouting magic beans, faces off against a man-eating giant and makes several perilous ventures up and down the beanstalk to bring stolen wealth to his family. Here, a bedtime story passed from parent-to-child about a war that once raged between humans and giants becomes the catalyst for further exploring the giant’s realm, and establishing grounds for their descent on earth when free from human control.

Continue reading at Graffiti with Punctuation.
Posted by Andy Buckle at 10:13 PM