DISCLAIMER: If you have not yet seen Richard Linklater’s extraordinary ‘Before Sunrise’ and ‘Before Sunset’ (and I strongly encourage you to do so) and if you have not yet seen ‘Before Midnight’ and would like to remain completely in the dark, please do not read any further. While I have refrained from delving into too much depth, it is very difficult to discuss this film without giving anything away. Damn near impossible, in fact. Still, as one of the year’s best films so far, and the conclusion to one of the greatest trilogies ever made, this is a film worth doing the prep for. 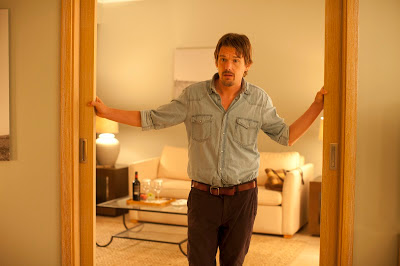 Directed by Richard Linklater (Dazed and Confused, Bernie) and written in collaboration with the film’s now-iconic stars Ethan Hawke and Julie Delpy, Before Midnight is admittedly a dense and exhausting experience (and at 109 minutes it clocks in at significantly longer than the preceding installments), but also an exhilarating one. Offering up a rollercoaster of emotions in the raw and unflinchingly honest way it deals with a couple at a crossroads – reflecting on how they met and the experiences they have shared, rationally (and irrationally) evaluating their present situations and contemplating their future. Delpy and Hawke have rarely (perhaps never) been better than they are in this film, displaying an incredible range of emotions, and this screenplay, covering an array of themes in thoughtful depth, is perhaps the most impressive of the fine trilogy.

Continue reading at Graffiti With Punctuation.
Posted by Andy Buckle at 9:35 AM