When we first learned of the premise behind Guillermo Del Toro’s new film – giant robots controlled by humans battling enormous monsters that have entered through a crevasse in the Pacific Ocean – I’m sure it wasn’t hard for many to roll their eyes in dismissal. Admittedly my enthusiasm cooled too, considering the absence of the human characters from the promotional material, which made it look like another loud CGI slugfest. But, the master director of Cronos, Hellboy and Pan’s Labyrinth has made this project his own and transformed this epic apocalyptic struggle into the most visually sophisticated, heroic and entertaining blockbuster of the year, and quite substantially so. Co-written by Del Toro and Travis Beacham based on a story by the latter. 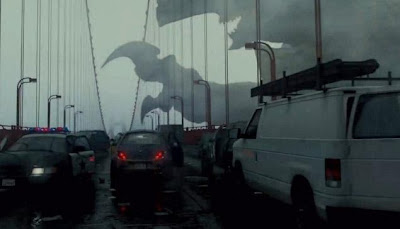 In opposition to the season’s other major blockbuster, Zach Snyder’s brooding, poorly paced and generally dull Man of Steel, this takes advantage of a lighter tone and a unique brand of humour that fits into De Toro’s world, while ensuring we grow to care about the characters and the sacrifices they make along the way. Comparisons will be made to Michael Bay's Transformers series, which is very unfair. I can safely assure you, this is a cut above those abominations.

To oppose an invasion of the Kaiju, gargantuan other-realm monsters who enter from a portal on the Pacific Ocean floor, humanity united to create giant mecha robots called Jaegers. Controlled by two human pilots, who share the psychological load by drifting their minds together via a neural bridge, they achieved success in fighting off the repeated swarms that wreaked destruction across the globe. In the latter stages of the war, with the Jaeger program shut down and alternative methods of protection put in place, a team of resistance fighters led by Marshall Stacker Pentecost (Idris Elba) commence a desperate attempt to defeat the Kaiju. Partnering up to pilot famous Jaeger, Gypsy Danger, are a washed-up former pilot (Charlie Hunnam), and an enthusiastic rookie (Rinki Kikuchi). Giving support are an Australian father and son pilot team (Robert Kazinsky and Max Martini), a pair of eccentric scientists (Charlie Day and Burn Gorman) and Marshall’s veteran Jaeger technician (Clifton Collins Jr.).

While humanity is under threat during the entirety – a swift montage at the beginning reveals that many cities have been decimated by Kaiju invasions - we never see humans trapped and suffering for emotional effect. There is a lot of destruction, naturally, but the goal of the Jaegers is to keep the invaders at bay of major cities, trying to deter them in the middle of the ocean. A struggle in central Hong Kong is a remarkable feat of effect, but rather than be appalled by the senselessness of the destruction, it is a part of the world we are immersed within, and an established context that results in nations across the globe simultaneously fearing and expecting the assaults.


Some Kaiju carcasses are too big to be removed, with cities being rebuilt within their remains. What a fascinating consideration. A sub-plot exploring a black marketing syndicate - the collection and fortuitous sale of Kaiju organs - further explores the mythology and brings the story to the Bone Slums in central Hong Kong, placing one of our human heroes directly in danger. 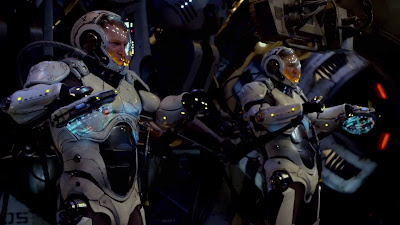 The gigantic scope of the battles in Pacific Rim is jaw dropping on every sensory level, and after experiencing the film on the similarly colossal IMAX screen; it is certainly worth the extra investment. Ramin Djawadi’s score effectively accompanies the shifts in tone, evolving a familiar track suitably. It offers a thumping base energy to the thrilling altercations, which are about as visually impressive I imagine is possible with the best of current technology. Despite being set at night, and often in the rain, the fights are clearly decipherable, inventively choreographed and never feel repetitive. The stakes also evolve, and we can see the size and menace of the Kaiju increase with each new wave, which forces the Jaeger teams to adapt. The finale, an underwater skirmish, had me clutching the armrests with intensity.


What I loved about this film was the importance of the human characters in forming the heart of the story. To operate the Jaegers the dual pilots’ consciousness has to be united – surrendering their memories and suppressed pain. They have to trust one another completely, and in the case of Becket and Mori, who are both damaged by personal tragedies, the bond strengthens them. While the giant machines are humanity’s weapons, they are useless without the dedication and courage of the pilots. I don’t know how Del Toro achieved it, to be honest, but I genuinely cared about and feared for these characters.


The performances are inconsistent, but the pleasantly surprising international team – we have some Brits, Australians and a Japanese woman – give this supportable global resistance (not a U.S resistance, mind you) a lift. Faring best are the screen-commanding Elba, the repeatedly-impressive Kikuchi, whose wrestle between adhering to the Marshall’s requests out of respect, and fighting for her earned chance has weight, and the skilled comic Day, an eccentric motor-mouth whose ‘out there’ fan-boy admiration and obsession ensures he gives his scenes plenty of energy. Ron Perlman’s brief appearance as Hannibal Chow, a black market trader who resides in a lavish Hong Kong club and wears sharp suits, is an absolute riot and though more screen time wasn’t warranted, it would have been welcomed.


Yes, there is some cheesy dialogue along the way and a pair of abominable Australian accents that disappointingly distract, but really there is little else to complain about with this film. I was on Del Toro’s wavelength here and wholeheartedly enjoyed every thrilling minute.


Pacific Rim is jaw dropping sensory excess by a filmmaker who keeps it all under wraps while branding a collaboration of familiar ingredients with his own vision. There is an edge-of-your-seat intensity to the battles, genuine emotion drawn from the character’s heroics and plenty of unapologetic oddball humour. Easily my favourite of this year's Blockbuster crop.


For those in Sydney check out Pacific Rim in IMAX at Darling Harbour
Posted by Andy Buckle at 10:29 AM