In Kick-Ass 2, the putrid dose of costumed sadism that it is, an audience is expected to have fun while watching a group of vigilantes beat up gangsters or one of the band of super-villains kill cops for no reason whatsoever. While the first film reveled in some gratuitous violence, at least there was a compelling narrative that built an inventive twist on the genre of the costumed hero, following an ordinary guy who attempts to clean up the streets. While I have never considered it a great film – I found Mindy’s upbringing especially concerning – some of the comedy was effective; there was a pulpy sense of style, a badass soundtrack and the birth of some exciting young actors. In this follow-up installment, written and directed by Jeff Wadlow (Never Back Down) and based on Kick-Ass 2 and Hit-Girl by Mark Millar and John Romita Jr, there is no wit, and the cycle of ultra-violence is less about serving justice where it is due, and more about exerting nasty revenge. Even the morals and ideals of the titular hero are questionable, leaving few identifiable positives. 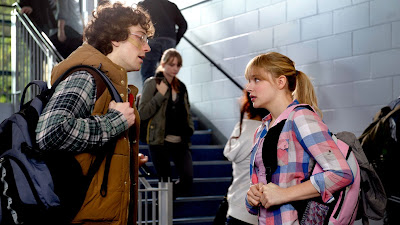 Even though Dave Lizewski/Kick-Ass (Aaron Taylor-Johnson) has retired from fighting crime, he finds himself re-inspired by other ordinary citizens – a team of costumed citizens who call themselves “Justice Forever” – and enlists Mindy Macready/Hit Girl (Chloe Grace Moretz) to train him up. But Mindy has made a promise to her guardian, Sergeant Marcus Williams (Morris Chestnut), that she will lead an ordinary teenage life and despite Dave’s pleadings to fight by his side, she tries to keep her promise. When Chris D’Amico (Christopher Mintz-Plasse) uses the inheritance left by his late parents to become the world’s first Super-Villain he takes on the name, The Motherf**ker’. He attracts a small army to join him in his murderous spree, targeting ‘Justice Forever’ and vowing revenge on Kick-Ass.

While it might have been fun to despise Mintz-Plasse’s Red Mist in Kick-Ass, here he has become a sickening individual. Dave isn’t likable enough to cheer for either. The only character that is given anything interesting to work with was Moretz, and her performance is easily the strongest amidst some truly dismal work. I admired Mindy’s attempts to conform into being an ordinary teenager. The problem, this ‘ideal’ is presented as being that of the slutty cheerleader, something so foreign to Mindy that she is set up to fail before she gets a chance to try. While Moretz’ performance and this angle was the strongest element for a while, Mindy is eventually sent back to her old habits, taking a peculiar detour through Carrie White territory with an unwelcomed helping of vomit and diarrhea.

The Motherf**ker is a whiny, abhorrent rich kid whose flimsy motivations for revenge and idea of what being a ‘villain’ involves are impossible to accept. Wadlow makes the mistake of believing that this character has depth because he has sadistic and evil agendas in every conceivable way. When hunting down the Justice Forever team, he attempts to rape one of the women. His ‘performance problems’ result in that not happening thankfully, but the repulsive intention is the kind of ugliness that there is a misguided desire to toy with – for laughs.

There is a cycle of violence that stems just as much from those trying to exert justice and create peace as it does from those who enjoy inflicting pain. This is no longer well-meaning humanity fighting crime, but a war between two misguided youths who believe that violence is the answer to everything. Just because Kick-Ass has little going on in his life outside of his night adventures, doesn’t mean he needs to further corrupt a young girl trying her best to transform her life into something deprived of her from a young age. The way this all wrapped up made me cringe.


Jim Carrey, who stars as the Justice Forever leader, Colonel Stars and Stripes, has a surprisingly small amount of screen time. He has understandably withdrawn his support for the film on account of the portrayed violence. Though, I didn’t think he was particularly bad here, I am confused how ultimately unimportant his character was.


This mess of a screenplay does a very poor job juggling these three core characters. We are thrown around all over the place, disoriented by the unfocused direction the film is taking, confused by the absence of neither any of the preceding parody nor any justification of the thematic angles. This film suggests that skipping school to join an underground club is the way to make a difference in the world. For the girl who tries to fit in, she ends up the brunt of bullying. What kind of world is this? An unpleasant one. I suggest sticking well clear.