Despite the top casting and some dazzling action sure to please fans, with a bloated story, an exposition-heavy and context-via-flashback reliant screenplay, an unsatisfying and drawn-out final confrontation and wearying slews of destruction, to name a few, Man of Steel is fraught with issues. Zack Snyder (300, Watchmen) is at the helm of Man of Steel deemed a dubious decision during the production and confirmed post-viewing, with Chris Nolan (Inception, Memento) serving as producer and story co-creator (along with screenwriter David S. Goyer). Nolan has undeniable influence over the project, and I’d say a big contributor to the film’s darker tone, and as a result the non-existent fun value. 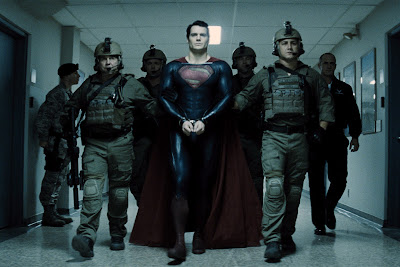 Man of Steel opens on the planet Krypton, which is facing imminent destruction. A scientist, Jor-El (Russell Crowe), and a renegade military commander leading a coup, General Zod (Michael Shannon), face off to try and preserve the Kryptonian race. In a desperate attempt to save his people, Jor-El sends his son Kal-el, the first natural birth in a very long time, and Krypton’s genetic codex, to Earth and banishes General Zod and his followers to the ‘Phantom Zone’. But, upon Krypton’s obliteration Zod is released and sets his sights on finding Kal-El.

Raised the adopted son of Jonathan (Kevin Costner) and Martha Kent (Dianne Lane), Kal-El (Henry Cavill) is named Clark. His physiology has left him with superhuman abilities, powers he intuitively uses to help others but has to learn to harness. His father, to devlop Clark’s moral compass, advises him not use them publicly until he believes humanity is ready to accept him. He drifts mysteriously between jobs, saving stranded oil riggers and wandering through the Arctic. When Zod touches down on Earth searching for the alien hidden in the midst, Clark dons the suit, finding an unlikely ally in a ‘Pulitzer Prize Winning’ Daily Planet reporter, Lois Lane (Amy Adams), and sets about fulfilling his destiny.


Continue reading at Graffiti With Punctuation.
Posted by Andy Buckle at 11:18 AM