Written and directed by Paul Wright, his debut feature film following a number of award-winning shorts, For Those in Peril is a visceral and complex psychological drama with an emotional intensity that continually keeps a viewer guessing. This is a fresh vision from a bold and talented filmmaker who has an interest in telling his stories and provoking his audience with inventive sensory experimentation. 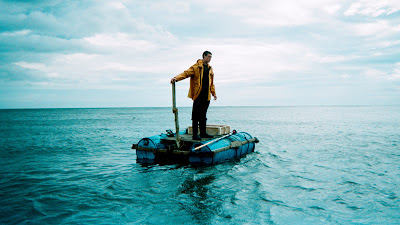 Aaron (George MacKay, The Boys Are Back), a young misfit living in a remote Scottish fishing community, is the lone survivor of a mysterious fishing accident that claimed the lives of five men including his older brother, Michael. With ocean folklore an influence the village holds Aaron responsible for the tragedy, and he finds himself an outcast. Struggling with his own demons, unable to remember what happened out on the water, he refuses to believe that his brother has died and holds misguided hope in his return. Though he briefly finds comfort in spending time with his brother’s former girlfriend, his worsening anxieties eventually bring him in confrontation with his darkest fears.


Continue reading at Graffiti With Punctuation.
Posted by Andy Buckle at 9:50 AM