Sleep Tight, directed by Jaume Balaguero (co-writer/director of [Rec] and [Rec2]) and written by Alberto Marini, tells the tale of an embittered concierge (an intense and often terrifying Luis Tosar, Even the Rain, Cell 211) at a Barcelona apartment building who plots to make one of the residents miserable. This intelligent and claustrophobic thriller serves up suspense in spades and delves into one of humanity's darkest fears. 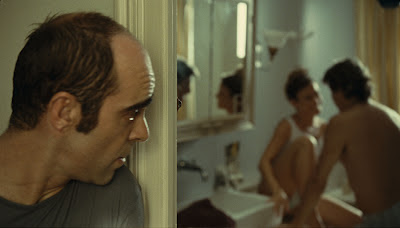 Cesar is a man in despair, a morose individual who rarely gets noticed and who claims to have never been happy in his life. He likens it to being blind or deaf, but considers it much worse because he completely lacks motivation to get out of bed and live a life. He is an individual who gets through his day by subsisting on the pain of others and resenting those who enjoy their lives. He has access to all of the apartments and is a keen observer of the comings and goings of his neighbours.

He visits his ill mother, an invalid who listens to her son's confessions in disgust but is unable to respond, and takes lengthy and inexplicable absences from his post. As a result his job is constantly being threatened. But there is an evil desire keeping Cesar going every day; the desire to be happy and an obsession with the perky and carefree Clara (Marta Etura), whose warmth and cheerfulness is too much for Cesar.

In order for him to find happiness Clara will have to suffer his torment and face the brunt of a series of ever-worsening doses of bad luck. He sends her anonymous letters and texts, tweaks with her cosmetics and plays a part in her apartment being infested with cockroaches. With Cesar treading a fine line when infiltrating Clara's apartment will he find himself exposed? While most of the tenants ignore him, Ursula, one of the youngest keeps him under close watch.

The film opens in a clinical fashion, taking the time to acquaint us with Cesar and his largely uninteresting daily routine and the claustrophobic atmosphere of the rooms and the foyer where almost the entire film takes place. Tosar's compelling presence ensures we fully invest with him immediately and Balaguero does a great job ensuring there is an ever-present feeling of pending menace accompanying Cesar. A lot of Cesar's actions at first appear to be a little strange but meaning is explained soon enough and what we have just seen but not really understood takes on frightening new significance. For example, who is the woman he wakes up beside before leaving for work?

It is revealed to be Clara, but when they meet later that morning, she doesn't appear to be his partner or treat him any differently than one would a friendly doorman. Did she even know he was there? What is the significance of the yellow envelopes? Why does Ursula treat him with rudeness and suspicion and demand money from him? The patience displayed by this intelligent screenplay is brilliant, offering up many early misleads and leaving a viewer with plenty of questions, before slowly revealing the harrowing answers.

Just imagining being in Clara's situation in several of these sequences is enough to give you shivers. There is plenty of perverse behaviour here and the finale leaves nothing less than a knot in your stomach and a bad taste in your mouth. As Cesar's intentions begin to be brought to light - we watch him get increasingly desperate to make Clara's life unpleasant, and find ways to manipulate situations that threaten his ploy - the more unpredictable and gripping the story becomes. His despicable actions shock, but at the same time we begin to find ourselves sympathising with the man. 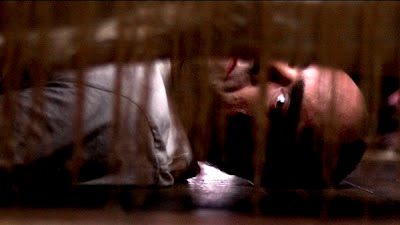 Cesar is the film's protagonist, so we are situated in the immediate space of the villain, which is somewhat different to the typical thriller. We are in the headspace of the psychopath, meaning that we are implicated in his crimes but are also in the best place to understand his motivations. While it is rarely apparent in his facial expressions that he has anything sinister about him, his cold, dead eyes and evident lack of remorse that convey his true nature. He is visibly distressed to see Clara continue to be her usual joyous self even though (on one occasion) she emerges from the lift self-conscious about the mysterious rash that has appeared on her face. Tosar, a powerful screen presence and used to playing intense characters who are faced with conflict and battling emotions (Cell 211 for example) is outstanding.

There is a wonderful sequence in the middle of the film where Cesar, required to salvage a bag he left in Clara's apartment, tries to evade Clara and her boyfriend after placing himself in a compromising position. On one hand we want Cesar to be caught, but because he is the film's focus and because the suspense in this scene is so suffocating, we hope he evades detection too. It is the clever crafting of these thrilling set pieces that make this Sleep Tight a rewarding and easily recommendable experience. It's a devastating film so its not one for those easily unsettled, but as the Closing Night selection (from memory Julia's Eyes, another thriller, was the film that screened last year) it sure is an unnerving way to end the proceedings.