Magic Mike, distributed through Roadshow Entertainment, has an Australian release scheduled for July 26.

Magic Mike, written by Reid Carolin and directed by Steven Soderbergh (Ocean's Eleven, Contagion), one of the most prolific filmmakers in the business, is a stylish character study and backstage insider into the multiple personalities and generations of the male stripper industry.

19 year-old Adam (Alex Pettyfer), after moving to Tampa, Florida to live with his sister, Brooke (Cody Horn), meets Mike Lane (Channing Tatum) at a local construction job. It is revealed that Adam has a temper, having wasted a football scholarship after a run-in with his coach, and quits the construction job after a single day because of an argument. Mike drops Adam off at home, expecting to never see him again. Later that night, Adam spots Mike in line waiting to enter a popular nightclub. Adopting him as his wingman, Mike gets Adam in the door and introduces him to his lifestyle. 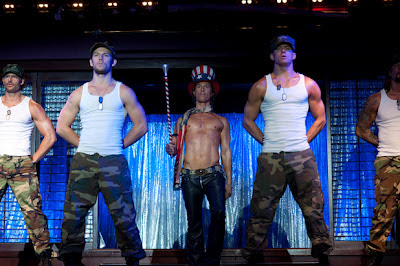 He is a stripper known as 'Magic Mike' who works for a troupe of dancers known as Xquisite, managed by Dallas (Matthew McConaughey). After being convinced to fill in for an indisposed team member, Adam is a surprise hit with customers, and having been given the nickname "The Kid", joins Xquisite. Mike takes Adam under his wing, schooling him in the arts of picking up women and making easy money, while a blossoming relationship develops between him and Brooke. Ultimately, it is not all smooth sailing for Adam as the seduction of this sultry new lifestyle results in some poor decision-making and threatens his friendship with Mike.

Adam gets involved in dealing drugs for the club’s DJ, Tobias (Gabriel Iglesias), resulting in a violent brawl breaking out between Mike and Adam and some boys at a sorority gig after one of the girls falls ill from one of Adam’s administered drugs. Dallas’ reputation takes a hit and Tobias’ suppliers target Adam and Mike after the hefty stash is lost. Mike, trying so desperately to look after Adam, fails him and Brooke (whom he made a promise to) and has to make a life-altering sacrifice.

There is a sequence near the end of the film – one that sums up everything I liked about this film –featuring a conversation between Adam and Mike. Adam, despite his irresponsibility and his juvenile errors, is ecstatic about how his life has changed over the previous three months. He is has found his passion, is making a lot of money and has been introduced to luxuries he never would have fathomed before. He doesn’t realise that sitting across the table from him is a man who once felt like he did, but now has his sights set on a different avenue in life. Adam doesn’t realise what Mike has lost as a result of their friendship. This is very sad. The film’s finale is uplifting when you realise that Mike does manage to salvage something. 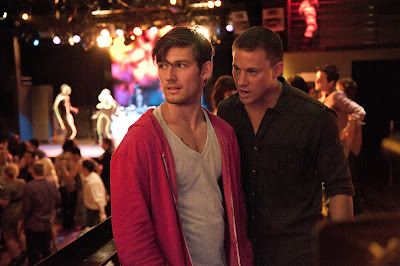 McConaughey, appearing in something like five films this year, is outstanding. Along with Killer Joe that makes it two for two for him so far. Dallas is an ageless maverick who relies on the younger colleagues in his employ. Faced with potentially losing his headline stripper, he has to be more than the business manager and the show's MC and find his form of old. Tatum continues to impress with his acting, displaying excellent dance moves, while crafting a character who is emotionally complex, personable and likeable; a guy whose plight we support and sympathise with. Pettyfer’s character, an up-and-coming youngster seduced by the world, is not as well-rounded as Tatum’s or McConaughey’s, but I understand to be loosely based on Tatum’s own experiences.
The weaknesses for me were the film’s dull female characters. Mike’s attraction to Brooke simply was not convincing and the pair shared little chemistry. Some of their exchanges were shot like they were fly-on-the-wall observations and meant to feel natural (and they may have even been unscripted), but were void of emotion. While Mike’s attraction to Brooke meant that he was often left embarrassed by her bluntness and rejection, Horn’s expressionless and awkward delivery failed to give her character any life, resulting in these scenes to be the least interesting. Olivia Munn, portraying Mike’s on/off sex partner, also gave a pretty boring performance. I started to feel sorry for Mike, continually dialling her up late for shallow, empty sex. Though the club sequences were impressive, from a performance and a technical point-of-view, after establishing the array of skills that these men have and conveying what each brings to the team, they became repetitive.
Soderbergh, under an alias, is also the DP of his films. True to form, Magic Mike is vibrantly composed, stylistically inventive, utilises an array of interesting camera angles, and lengthy unbroken shots. There is rarely a shot that doesn't lack creativity and several scenes are touched up interesting splashes of colour. 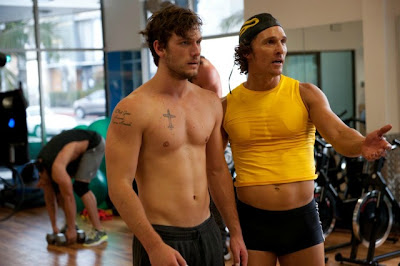 For many female viewers, the eye candy will be breathtaking. For male viewers, it sometimes feels like you have been dragged along to a ladies night out and forced to watch on. It does get uncomfortable, but Tatum and McConaughey’s skills are admirable and their routines amusing. Following them backstage we get to know these men outside of the club. Dallas, a veteran who loves to entertain, is a businessman looking to expand and take his team to Miami. Mike is an entrepreneur, also working in construction and with dreams of opening a custom furniture business.
Mike has a bad credit record, perhaps due to years of unchecked and irresponsible spending and because his primary source of income is cash tips, which results in him being unable to secure the means to open his business and move on to something new. He doesn’t want to become Dallas, and he sees his younger self in Adam. Mike nurtures the kid, teaches him what he knows in the hopes that he might one day replace him as the headline talent, should he desire it. He also tries to keep him on the right track; a track he may have left at the same age.
Contrary to what the marketing suggests - and it makes sense to headline the film’s spunky stars and Tatum’s dance moves to attract female audiences - Magic Mike is not a comedy. It has amusing moments, but it is a surprisingly bleak and layered character study. There is much more to these guys than the hour a night they perform, and it becomes quite moving. Soderbergh handles his subject intelligently – appealing to mass audiences and a blockbuster crowd, but disguising his craft and art house sensibilities behind the sculptured bodies of his stars – and draws some excellent performances.
My Rating: ★★★1/2 (B)
Posted by Andy Buckle at 2:47 PM