Margaret's arrival to cinemas - and it has only just come to Sydney this week - has been a long time coming. Notoriously plagued by post-production delays and multiple lawsuits, writer/director Kenneth Lonergan (You Can Count On Me) shot the film in 2005 and had a release scheduled for 2007. But, there were struggles to create a final cut that Lonergan, producer Gary Gilbert and Fox Searchlight Pictures could come to an agreement on. Also, since its conception executive producers Anthony Minghella and Sydney Pollack have both passed away. Fox insisted that the film's running time could not exceed 150 minutes, but Lonergan's preferred cut was closer to three hours. Even Martin Scorsese and his editor Thelma Schoonmaker contributed to editing a 150-minute cut of the film, but this cut was rejected. So, what we have the opportunity to see is a version that is noticeably missing sequences that would aid in further developing some of the film's subplots. While an outstanding film already, one can only imagine the benefits of viewing the longer version of the film, the one Lonergan desired to be seen. 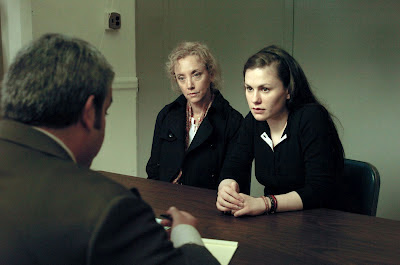 Margaret tells the tale of Lisa Cohen (Anna Paquin, outstanding), a 17-year-old Manhattan student who lives with her stage actress mother, Joan (J. Smith Cameron, Lonergan's wife), and her younger brother. While Lisa is shopping she irresponsibly distracts a bus driver, Maretti (Mark Ruffalo) - though it is arguable his negligence of reacting to Lisa's waving when in the care of a busload of passengers is as much to blame - and a pedestrian crossing the road at a set of lights, Monica (Alison Janney), is hit. Lisa and several other witnesses try in vain to help the woman, who dies in Lisa's arms after a few minutes of confusion and requests for Lisa to call her daughter. Lisa is hugely affected by the incident with the knowledge that she played a role in the woman's death. Feeling sorry for the driver, Lisa lies to police claiming that the traffic light was still green and that it was nothing more than a horrible accident.

Lisa's life has been thrown in turmoil and she starts to act out and make some questionable decisions, starting down a misguided path where she emotionally alienates herself from everyone she knows. The film tracks a collision of the youthful ideals of a bright, heavily-opinionated and self-righteous individual and the realities of the justice system of the country she lives in; a country that has not long prior been ravaged by destruction and where suffering can equate to monetary gain. Her good relationship with her mother sours, she becomes prone to aggressive outbursts at school and attacks her classmates for expressing their opinions, she is the source of romantic interest of one of her classmates, and deliberately requests that another guy (Kieran Culkin), whom she does drugs with at a party, take her virginity. 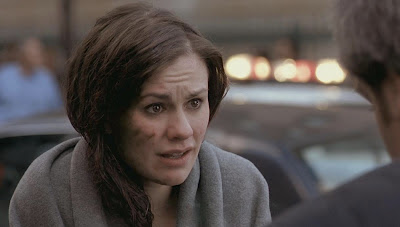 Lisa also becomes obsessed with the accident, contacting Monica's only relative, a cousin, and befriends her best friend, Emily (Jeannie Berlin), who takes care of the funeral arrangements. Lisa, in a decision to expunge her own guilt, is convinced that the bus driver should pay for his role in the accident. When he denies any wrongdoing on his part and claims to not remember Lisa - and who can blame him, Lisa told officers the light was green and the case is closed - she decides to change her statement. When she must claim that Maretti hit Monica on purpose to lead to criminal prosecution, she decides to take the bus company to court. Though Lisa just wants her guilt displaced and the driver fired, monetary compensation, which would go to Monica's cousin (who suddenly becomes very interested), then becomes the primary motivation. This leads to all sorts of moral quandaries and questionable avenues for Lisa and Emily to pursue, and we also watch their relationship disintegrate in the process.

It is difficult to know where to start when discussing this film because there is so much going on and it is all so fascinating. It is a feat of screenwriting because the dialogue exchanges are so well written and so well performed that they become aggravating (and moving) to watch at times. This is because the characters are speaking just like people do. Under the stress of an argument, with their emotions playing a part, they often misuse words and say the wrong thing. In Lisa's case it happens on a few occasions and it is clear she didn't mean to insult the other person. In some instances, however, she does snap with malicious intentions.

The performances are all phenomenal. Anna Paquin gives one of the best performances I have seen in the last few years, but Jeannie Berlin, J. Smith Cameron, Matt Damon, Michael Ealy, Kieran Culkin and in one lone wonderful sequence each, Mark Ruffalo and Alison Janney, all deliver outstanding work. The exchange between Paquin and Ruffalo is especially intense. I also loved the sparse use of the score to accompany infrequent shots of the city and the sky. Margaret is a post 9/11 film and is brimming with thought-provoking ideas. Unraveling all of them, and discussing how these opposing ideas effectively builds an intriguing study of not just American youth and the morals/opinions of the individual, but extends to analyse New York City itself (with sequences taking placer in the streets, classrooms, theatres, operas and restaurants it is a film about a city in healing), America as a nation and even forces beyond humanity, is a difficult challenge. 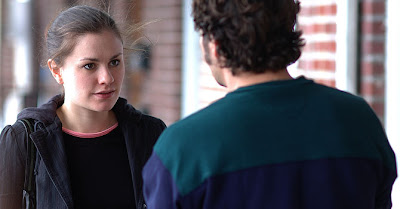 Late in the film, after a series of oppositions, and frustrated arguments with anyone who questions her goals and naive belief that justice will be served, Lisa is called out about her desire to transform this horrific incident into her own personal opera, and this is a justified reading. She is a very unpleasant human being; a know-it-all, selfish and misguidedly self-righteous to the point of potentially being considered crazy, but there are several moments where we sympathise with her. The film's numerous shouting matches usually emerge as a result of Lisa's desire for self-drama and the irritation this causes to whoever is in her company.

This is a film that provokes plenty of afterthought and discussion. It is essentially a mess - choppy editing, large gaps in the plot, some subplots are overdeveloped and have little bearing on the central story - but rather than prove irritating, it actually adds to the intrigue. Things begin to get very frustrating indeed, but the events stir so many emotions that it is impossible not to be completely engrossed in this fascinating tale.

Margaret is right on 150 minutes, so it is a tough sit, but as we know it could and should have been even longer. I feel a viewer will be better served by the extended edition - now available in the U.S - because it is so dense on a thematic level. There is too much to discuss and I won't even delve into some of the subplots - Joan's acting and her romance with a businessman (Jean Reno) and Lisa's promiscuous attraction to her maths teacher, Mr. Aaron (Matt Damon).

While a lot of the ideas are very in-your-face, there are still a lot of underplayed themes. One instance that really impressed me - and every classroom sequence was fantastic - was when one of Lisa's fellow students stands up for another and criticises the rest of the class for attacking her opinions on global politics, 9/11 and terrorism. Later, in Lisa's English class, her teacher (Matthew Broderick) flat out dismisses the opinion of one of the students, which was actually a well thought-out and argued opinion. In another instance, a student declares that teenagers should rule the world because they haven't been disillusioned by the hypocrisies of the world, but Lisa's story is exactly that; an attempt to have her naive ideals fulfilled, a struggle to hide her hypocrisies while facing opposition by the established governing of the adult world.

There are also some very effective phone conversations between Lisa and her remarried father (played by Lonergan), who lives in California. Throughout the story the prospect of Lisa accompanying him on a riding trip, and even moving to California to live with him, are raised. It is interesting, because purely through these conversations we get an insight into his somewhat sad and world-weary character, offering the best advice he can over the phone. Learning that this character is played by Lonergan himself, the way he becomes more frustrated by his daughter's irrational behaviour, could replicate his frustration with his own project. Much like all of the dialogue, the two converse exactly how a father and daughter - somewhat estranged but still with great respect for one another - would talk.

Margaret is an absorbing character study fuelled by an intelligent script, exceptional performances and about a dozen memorable sequences. It is close to overwhelming trying to interpret all of its opposing ideas - religion and politics, literature and interpretation, youthful naivety and idealism, guilt and justice - and it is nauseating on reflection, but it is a film that deserves to be seen and a film I look forward to watching again. It is, quite simply, a damn shame that it has taken so long to reach cinemas.