So, this happened yesterday. 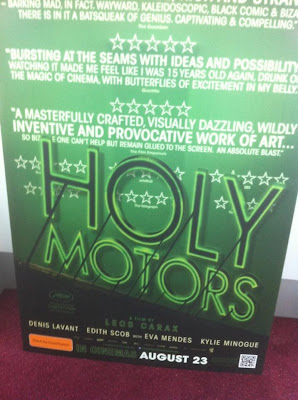 My five star review of Holy Motors, which is my favourite film of the year so far, was quoted on one of the promotional standees for the film. It features quite prominently too. Richard Haridy, a contributing writer for Quickflix Blog, and Richard Gray, editor of The Reel Bits, were also quoted.

"A masterfully crafted, visually dazzling, wildly inventive and provocative work of art. So bizarre one can't help but remain glued to the screen. An absolute blast."
Holy Motors hits cinemas August 23 on a limited release. It caused a stir at Cannes, it received rousing applause at SFF, and is soon to be screening at NZFF and MIFF. Be sure to make an effort to see it. You won't have seen anything like it before, and you certainly won't forget it. I can't wait to see it again.
Posted by Andy Buckle at 8:52 AM