Fighting off a wave of tiredness brought on by the day job, I made my way to the Factory Theatre in Marrickville on Thursday for the opening night of the 2013 Sydney Underground Film Festival. This setting is perfect for a festival such as this. With a wealth of weird, wild indie features and controversial documentaries, I embraced this challenge and set out to take full advantage of the opportunity to catch some of the talk-of-the-town films that screened recently in Melbourne. Drinks and pizza were supplied and consumed and we made our way into Cinema 1, the largest, for Alejandro Jodorowsky’s The Dance of Reality. 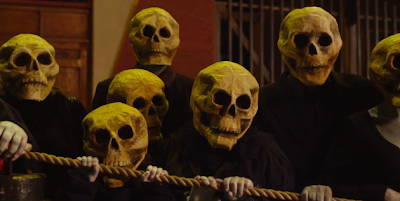 REVIEW: The Dance of Reality

As you watch a film like El Topo, one of the many questions you ask yourself is: what sort of person could have made this film? Well, in The Dance of Reality, the expectedly bonkers return of veteran Chilean auteur Alejandro Jodorowsky to the screen for the first time since 1990, we are privileged to an autobiographical insight (with many an imaginative, mythological twist) into his childhood and family. While the crazy genius has remained a mystery for some time, I wonder how much we really learn about him in this film, and how much has been augmented to keep up the grand illusion of his life. In the realm of Jodorowsky, responsible for some of the most searing cinematic images I have ever seen – his films are an example of gluttonous surrealism, indulgent but calculated – this is actually pretty accessible. Having said that, he doesn’t skimp on the strange stuff.


Continue reading this review, and check out reviews from Day 2 (Harry Dean Stanton: Partly Fiction and Magic Magic) at Graffiti With Punctuation.
Posted by Andy Buckle at 10:42 PM