Rush, directed by Ron Howard (A Beautiful Mind, Frost/Nixon) and written by Peter Morgan (Frost/Nixon, The Damned United) is a slick looking film that keeps pace with a lot of fast editing and montage. The exciting latter half racing sequences – spectacularly shot by Anthony Dod Mantle, with an understated Hans Zimmer score and some terrific sound design – are the highlight and improve the film significantly following an underwhelming dual insight into the story’s central rivals. 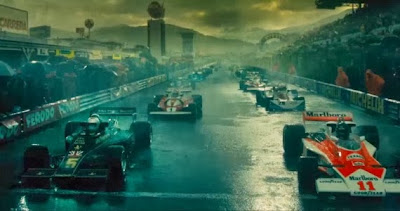 Brit James Hunt (Chris Hemsworth) and Austrian Niki Lauda (Daniel Bruhl) became the fiercest of competitors during the mid 1970’s, with the 1976 F1 season becoming one of the most tumultuous in the sport’s history.  Their intense rivalry – which began at a small-time scuffle at a Formula Three race at the Crystal Palace circuit and eventually pitted two of the leading F1 teams in McLaren and Ferrari against one another – became an industry sensation. Throughout the season their personal lives played a role in their ability to focus on their driving, while suspensions, ongoing arguments about each other’s character, and devastating accidents significantly change the lives of these drivers and their relationship. The series of events – which continue to escalate – are shocking and exhilarating, and Howard has put together a film sure to be universally pleasing.


Continue reading at Graffiti With Punctuation.
Posted by Andy Buckle at 6:50 AM