Coming to cinemas this week are Planes, Turbo, One Direction: This is Us, Percy Jackson: Sea of Monsters, I'm So Excited and in Melbourne, A Hijacking. It is clearly school holidays. Not an exciting week at all. 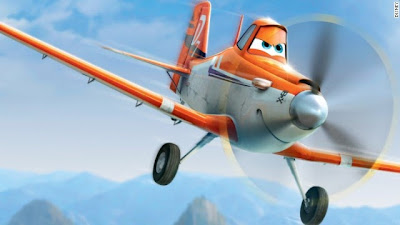 Planes - Dusty Crophopper (Dane Cook) is a vertically-challenged crop duster plane who works at a cornfield and practices aerobatic maneuvers in his spare time, dreaming of becoming a racer. A Cars spinoff from Disney.

Turbo - 2013 American is an animated comedy produced by Dreamworks Animation. It is based on an original idea by David Soren, who directs the film. Turbo tells the story of an ordinary garden snail whose dream to become the fastest snail in the world comes true.

Percy Jackson: Sea of Monsters - Percy Jackson, the son of Poseidon, continues his epic journey to fulfill his destiny as he teams with his demigod friends to retrieve the Golden Fleece, which has the power to save their home and training ground, Camp Half-Blood.

One Direction: This is Us - An intimate all-access look at life on the road for the global music phenomenon. Weaved with stunning live concert footage, this inspiring feature film tells the remarkable story of Niall, Zayn, Liam, Harry and Louis' meteoric rise to fame, from their humble hometown beginnings and competing on the X-Factor, to conquering the world and performing at London's famed O2 Arena. Hear it from the boys themselves and see through their own eyes what it's really like to be One Direction.

I'm So Excited - A technical failure has endangered the lives of the people on board Peninsula Flight 2549. The pilots are striving, along with their colleagues in the Control Center, to find a solution. The flight attendants and the chief steward are atypical, baroque characters who, in the face of danger, try to forget their own personal problems and devote themselves body and soul to the task of making the flight as enjoyable as possible for the passengers, while they wait for a solution. Life in the clouds is as complicated as it is at ground level, and for the same reasons, which could be summarized in two: sex and death.

A Hijacking - The cargo ship MV Rozen is heading for harbour when it is hijacked by Somali pirates in the Indian Ocean. Amongst the men on board are the ship's cook Mikkel (Pilou Asbæk) and the engineer Jan (Roland Møller), who along with the rest of the seamen are taken hostage in a cynical game of life and death. With the demand for a ransom of millions of dollars a psychological drama unfolds between the CEO of the shipping company (Søren Malling) and the pirates.


Weekly Recommendation: Almodovar fans will likely get a kick out of I'm So Excited while Turbo looks to be the pick of he kiddie flicks. A Hijacking, which is disappointingly only screening in Melbourne, sounds fantastic, and I believe it is.
Posted by Andy Buckle at 7:04 PM