In Blue Jasmine, the latest feature from the great Woody Allen – incredibly, this is his 45th as director – an astounding Cate Blanchett stars as Jasmine, a wealthy socialite living in New York who experiences a tumble down the social ladder when her husband, Hal (Alec Baldwin) - a crooked financier and serial adulterer - gets nabbed by the FBI. What ensues makes not only a serious dent in her material assets – though despite being ‘dead broke’ she does manage to hold onto her Louis Vuitton bags and continue to fly first class - but leads to a nervous breakdown and deeply-embedded psychological trauma. 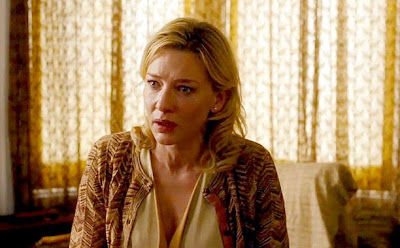 With no other options she decides to move in with her lower-middle class sister, Ginger (Sally Hawkins), who lives in San Francisco. Ginger has put her plans to live with her fiancé Chili (Bobby Cannavale) aside briefly, offering to help Jasmine get her life back together however she can. Amidst a cocktail of drugs, Jasmine tries to shelter herself from her embarrassment and heal her wayward sense of reality by enrolling in a computer class in preparation for studying interior decorating online and taking on work as a dentist's receptionist.

There is no doubt about it; Jasmine is a mess. As a self-centered elitist she snobbishly wades through the life of Middle America looking down on Ginger and the new people in her life. Her pratfalls are often hilarious, but we always fear that she is set to take a mighty tumble off the rails. She is oblivious to the fact that her sister is happy with her current life. To Ginger, Chili isn't a loser. He loves her, he's a hardworking guy and in her words "he's sexy and doesn't steal." She also fails to recognize that becoming an interior decorator takes hard work and money, and that working a menial job may be in her best interests. Jasmine bullies Ginger, claiming that without aiming for something substantial - both professionally and in a partner - she'll never improve her life. Jasmine had it all, and we soon see that she becomes increasingly desperate to return to her status.

Jasmine's mental health is in disarray. She has always been apathetic towards her sister, a trait she begins to wrestle with and regret. While it should be difficult to sympathise with a person like Jasmine, Allen and Blanchett make it so. The film's structure is initially jarring, offering flashbacks to when Jasmine and Hal were wealthy and happy. While Jasmine has been trying to seek refuge from the anxiety that these traumatic memories cause her, they continue to flood back whenever a trigger is set off. This often ends with her talking to herself in the street and drawing concerned looks.
Blanchett is absolutely brilliant in this role. One of her best. She has sensational comic timing and she navigates her character’s battered emotional state beautifully. She possesses the grace and poise of a stylish socialite and whether it is the façade or the real thing, it is eerily evident. The entire ensemble delivers, however. Hawkins and Cannavale (who are always great) and Andrew Dice Clay, as Ginger’s to-the-point ex-husband Augie, are particularly good, while Louis C.K, as an unlikely love interest for Ginger, Max Casella, as Jasmine’s impromptu blind date and Michael Stuhlbarg, as a handsy dentist, have some great moments too.

While some early dialogue is too consciously - and a little distractingly - exposition-heavy, there is little to fault here. Woody Allen's films rest on his writing, the characters he creates and the fine casts he puts together. In a long list of memorable female characters Jasmine is one of his finest creations and Blue Jasmine ranks as an outstanding latter entry (surely!) in the career of the prolific genius.