In cinemas this week - Ender's Game, Delivery Man, Cloudy With A Chance of Meatballs 2, The Spectacular Now, Kill Your Darlings, Closed Circuit, Fallout, Night Train to Lisbon and The Spirit of '45. 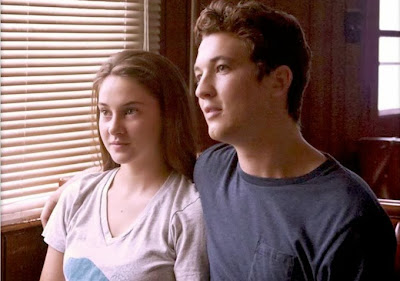 Ender's Game - In the near future, a hostile alien race (called the Formics) have attacked Earth. If not for the legendary heroics of International Fleet Commander Mazer Rackham (Ben Kingsley), all would have been lost. In preparation for the next attack, the highly esteemed Colonel Hyrum Graff (Harrison Ford) and the International Military are training only the best young children to find the future Mazer. Ender Wiggin (Asa Butterfield), a shy, but strategically brilliant boy is pulled out of his school to join the elite. Arriving at Battle School, Ender quickly and easily masters increasingly difficult war games, distinguishing himself and winning respect amongst his peers. Ender is soon ordained by Graff as the military's next great hope, resulting in his promotion to Command School. Once there, he's trained by Mazer Rackham, himself, to lead his fellow soldiers into an epic battle that will determine the future of Earth and save the human race. Based on the best-selling, award winning novel.

Delivery Man - The story of affable underachiever David Wozniak, whose mundane life is turned upside down when he finds out that he fathered 533 children through sperm donations he made twenty years earlier. In debt to the mob and rejected by his pregnant girlfriend, things couldn't look worse for David when he is hit with a lawsuit from 142 of the 533 twenty-somethings who want to know the identity of the donor. As David struggles to decide whether or not he should reveal his true identity, he embarks on a journey that leads him to discover not only his true self but the father he could become as well.

Cloudy With A Chance of Meatballs 2 - Cloudy 2 picks up where Sony Pictures Animation's hit comedy left off. Inventor Flint Lockwood's genius is finally being recognized as he's invited by his idol Chester V to join The Live Corp Company, where the best and brightest inventors in the world create technologies for the betterment of mankind. It's always been Flint's dream to be recognized as a great inventor, but everything changes when he discovers that his most infamous machine (which turns water into food) is still operating and is now creating food-animal hybrids - "foodimals!" With the fate of humanity in his hands, Chester sends Flint and his friends on a dangerously delicious mission, battling hungry tacodiles, shrimpanzees, apple pie-thons, double bacon cheespiders and other food creatures to save the world again!

The Spectacular Now - With sly humor and an intensity of feeling, The Spectacular Now (directed by James Ponsoldt, Smashed) creates a vivid, three-dimensional portrait of youth confronting the funny, thrilling and perilous business of modern love and adulthood. This is the tale of Sutter Keely (Miles Teller), a high school senior and effortless charmer, and of how he unexpectedly falls in love with "the good girl" Aimee Finecky (Shailene Woodley). What starts as an unlikely romance becomes a sharp-eyed, straight-up snapshot of the heady confusion and haunting passion of youth - one that doesn't look for tidy truths. The film was written by Scott Neustadter and Michael Weber (500 Days of Summer) and also features wonderful supporting turns from Brie Larson, Kyle Chandler, Jennifer Jason Leigh, and Mary Elizabeth Winstead. Linked review by Cam Williams, Graffiti With Punctuation.

Kill Your Darlings - Daniel Radcliffe stars as Beat Generation icon Allen Ginsberg in this biopic set during the famed poet's early years at Columbia University, and centering on a murder investigation involving Ginsberg, his handsome classmate Lucien Carr, and fellow Beat author William Burroughs. The year is 1944. Ginsberg (Radcliffe) is a young student at Columbia University when he falls hopelessly under the spell of charismatic classmate Carr (Dane DeHaan). Alongside Carr, Ginsberg manages to strike up friendships with aspiring writers William Burroughs (Ben Foster) and Jack Kerouac (Jack Huston) that would cast conformity to the wind, and serve as the foundation of the Beat movement. Meanwhile, an older outsider named David Krammerer falls deeply and madly in love with the impossibly cool Carr. Later, when Krammerer dies under mysterious circumstances, police arrest Kerouac, Burroughs, and Carr as potential suspects, paving the way for an investigation that would have a major impact on the lives of the three emerging artists.

Closed Circuit - One morning, a busy London market is decimated by an explosion. In the manhunt that follows, only one member of the suspected terrorist cell survives: Farroukh Erdogan (Denis Moschitto), who is arrested and jailed. Preparations begin for what promises to be the trial of the century. But there’s a hitch: the government will use classified evidence to prosecute Erdogan, evidence so secret that neither he nor his lawyers can be allowed to see it. Hence the need for the Attorney General (Academy Award winner Jim Broadbent) to appoint a Special Advocate, an additional government-approved defense lawyer (Claudia Simmons-Howe, played by Golden Globe Award nominee Rebecca Hall), one who has clearance to see classified evidence and who can argue for its full disclosure when the trial moves to “closed” session. The rules for the Special Advocate are clear: once the secret evidence is shared with her, Claudia will not be allowed to communicate even with the defendant or with other members of the defense team. But just as the case is on the eve of going to trial, Erdogan’s lawyer dies suddenly, and a new defense attorney, Martin Rose (Eric Bana), quickly steps in. Martin is tenacious, driven, brilliant – and an ex-lover of Claudia’s. As Martin begins to piece the case together, the outlines of a sinister conspiracy emerge, one that will draw him and Claudia dangerously close again.

Night Train to Lisbon - Raimund is a Latin teacher and an ancient languages expert. His life is transformed by a young woman on a bridge in the Swiss city of Bern, whom he saves from jumping to her death in the waters below. Raimund is intrigued but the woman disappears, leaving her coat. Inside it is a book by a Portuguese doctor which contains a train ticket. He uses it, setting off on a journey to Lisbon. While looking for the author, Raimund revisits a dark chapter in the country's history and unveils a tragic love triangle. He is drawn into a high-stakes puzzle. Ultimately his journey transcends time and space, touching on matters of history, philosophy, and medicine, encountering love and evolving into a liberating search for the true meaning of life.


Weekly Recommendation - Lots to pick from this week, with my sole viewing The Spectacular Now an obvious recommendation. A beautifully acted and quite lovely examination of teenage romance and the tough decisions all young people face on the high school/college cusp. Delivery Man, I believe a far inferior remake of French-Canadian comedy Starbuck, should be one to miss, while Ender's Game and Kill Your Darlings - lukewarm reviews, but still largely praised - have intrigued me for some time. Fans of the awesome Cloudy With A Chance of Meatballs will take a lot of convincing not to return to the cinemas for more food puns with the sequel. I'll be in line.
Posted by Andy Buckle at 8:21 AM