In cinemas this week: One Life (December 9), American Hustle, Battle of the Year and The Gilded Cage. 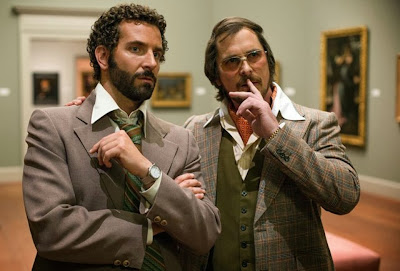 American Hustle - A fictional film set in the alluring world of one of the most stunning scandals to rock our nation, American Hustle tells the story of brilliant con man Irving Rosenfeld (Christian Bale), who along with his equally cunning and seductive British partner Sydney Prosser (Amy Adams) is forced to work for a wild FBI agent Richie DiMaso (Bradley Cooper). DiMaso pushes them into a world of Jersey powerbrokers and mafia that's as dangerous as it is enchanting. Jeremy Renner is Carmine Polito, the passionate, volatile, New Jersey political operator caught between the con-artists and Feds. Irving's unpredictable wife Rosalyn (Jennifer Lawrence) could be the one to pull the thread that brings the entire world crashing down. Like David O. Russell's previous films, American Hustle defies genre, hinging on raw emotion, and life and death stakes.

One Life - Daniel Craig narrates a feature length documentary about survival in the natural world.

Battle of the Year - An international dance crew tournament that attracts all the best teams from around the world, but the Americans haven't won in fifteen years. Los Angeles Hip Hop mogul Dante (Alonso) wants to put the country that started the Sport back on top. He enlists his hard-luck friend Blake (Holloway), who was a championship basketball coach, to coach his team. Armed with the theory that the right coach can make any team champions, they assemble a Dream Team of all the best dancers across the country. With only three months until Battle of the Year, Blake has to use every tactic he knows to get twelve talented individuals to come together as a team if they're going to bring the Trophy back to America where it started.

The Gilded Cage - Writer/director Ruben Alves’ enormously charming, semi-autobiographical Parisian comedy is the story of a loving, hardworking married couple whose long-held dream of returning to their homeland finally comes true – only to be secretly undermined by their overly dependent friends and neighbours. Maria (Rita Blanco) and José (Joaquim de Almeida) emigrated from Portugal 30 years ago. Ever since, they have lived in the modest ground floor lodgings of a chic apartment building in Paris, raising their now adult daughter and teenage son, and becoming utterly indispensible to all around them. When José learns he has inherited the family winery and the couple’s dream of returning to Portugal is now possible, they are elated – but struggle with how to tell those around them. However, word of the big news spreads anyway, and soon their family, neighbours, friends and employers are scrambling behind the scenes to find ways to prevent them from leaving.


Weekly Recommendation: American Hustle. David O. Russell's Silver Linings Playbook is still one of my favourite films of the year. Having a second film released in Australian cinemas in 2013 is extraordinary. I cannot wait. Also, we get it a week before the U.S.
Posted by Andy Buckle at 7:59 PM