Coming to cinemas across Australia this week: Bad Neighbours, Chef, Belle, Healing, The Double, Seduced and Abandoned and A Castle in Italy. From those I have seen, a strong week. 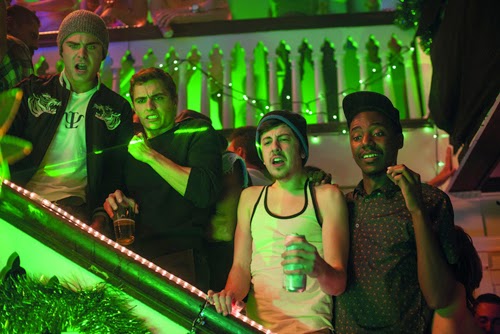 Bad Neighbours - When a fraternity moves into the neighborhood, Mac and Kelly Radner (Seth Rogan, Rose Byrne) want to be cool with it, and try to get along with their new young neighbors. But one thing leads to another, and when they pull what they thought was a balloon from their baby's mouth, only to discover it was a condom that he found on the front lawn, they feel they've put up with enough. The two houses declare war on each other, as Mac cuts the power and water to the frat house and the fraternity counters by stealing the air bags from the Radner’s car, only to leave them in inopportune places.

Chef - After talented and dynamic chef Carl Casper (Jon Favreau) isn't given the space he needs to shine at his L.A. restaurant due to the owner's (Dustin Hoffman) rigid traditional ways, he launches on a social media-fueled tirade against his nemesis food critic (Oliver Platt), which lands him without any job prospects. With a new lease on life, Chef Casper takes to the road with his son and his sous chef (John Leguizamo) to build a brand new food truck business. This smart take on food and chef culture contains poignant messages about the media-driven world we live in and the real meaning of success. With real heart, Jon Favreau plays a man who must find common ground between his passion for cooking and his love for his son. His direction of an ensemble cast, including Sofia Vergara, Robert Downey, Jr., Scarlett Johansson, Amy Sedaris, and perhaps, most notably, up-and-coming Emjay Anthony, is refreshingly honest and rings true.

Belle - Inspired by the true story of Dido Elizabeth Belle, the illegitimate mixed race daughter of a Royal Navy Admiral. Raised by her aristocratic great-uncle Lord Mansfield and his wife, Belle's lineage affords her certain privileges, yet the color of her skin prevents her from fully participating in the traditions of her social standing. Left to wonder if she will ever find love, Belle falls for an idealistic young vicar's son bent on change who, with her help, shapes Lord Mansfield's role as Lord Chief Justice to end slavery in England. Stars Gugu Mbatha-Raw, Matthew Goode, Tom Wilkinson, Emily Watson, Tom Felton and Miranda Richardson.

Healing - After 18 years in prison, Viktor Khadem (Don Hany - East West 101, Offspring, Serangoon Road, Broken Shore) is a man who has almost given up on life. Near the end of his sentence he is sent to Won Wron, a low-security prison farm 200 km outside Melbourne in regional Victoria, where Senior Case Worker Matt Perry (Hugo Weaving) has established a unique program to rehabilitate broken men through giving them the responsibility for the rehabilitation of injured raptors - beautiful, fearsome proud eagles, falcons and owls. Against all odds, Matt takes on Viktor as his number one test case, introducing him to Yasmine, the majestic Wedge-tailed Eagle with a two metre wingspan. If these two can tame each other, anything is possible. Inspired by true events, HEALING is a powerful, moving story of redemption, the discovery of hope and the healing of the spirit - in the most unlikely place, for the most unique men, through the most unusual catalyst.

The Double - From innovative filmmaker Richard Ayoade (Submarine) comes this tale of Simon (Jesse Eisenberg), a browbeaten office clerk working in an ominous government organisation. With his colleagues failing to recognise him on a daily basis, Simon fills his empty days with dreams of colleague Hannah (Mia Wasikowska), but any encounter with her leaves him tongue-tied and mortified. Undermined and undervalued everywhere he turns, it seems that his directionless life couldn’t get any worse, until one day his exact double gets a job at his company. As his confident and ambitious doppelganger climbs the corporate ladder, attracting the attention of Hannah on his way, our hero sinks further into mediocrity, and possibly even madness. Transposing the action from 19th century Russia to a surrealist modern-day America, this quirky adaptation of Fyodor Dostoevsky’s celebrated novella is a distinctly contemporary update of a literary classic. As with his acclaimed debut Submarine, Ayoade’s idiosyncratic visual approach comes laced with a dry wit that perfectly compliments the inner dysfunctions of his characters.

Seduced and Abandoned (Nova exclusive) - Alec Baldwin and filmmaker James Toback are on a mission: to remake Bernardo Bertolucci's legendary 1972 film Last Tango in Paris by setting it in Iraq in the mid-2000s. Hobnobbing their way around Cannes, the wisecracking duo meet up with a who's who of the film industry , including Francis Ford Coppola, Martin Scorsese, Ryan Gosling and Bertolucci himself, as they try to find money, a script and a cast for their impossible idea. Seduced and Abandoned is the delightful and utterly uncategorisable new pseudo-documentary from veteran director James Toback. A riff on the harsh economics of modern film turned unlikely buddy comedy, it's a glimpse into the funny film business and a gleeful homage to a lost time when film was made for film's sake.

A Castle in Italy - Valeria Bruni-Tedeschi writes, directs and stars in this hypnotic tapestry of family life. Valeria Bruni-Tedeschi plays Louise, an ex-actress struggling to hold her once wealthy family together and keep them connected to their beautiful estate in Piedmonte. Life becomes more complicated when Louise begins a relationship with smouldering Nathan (Louis Garrel) whose father Louise may already know too well. The film is a wonderful showcase for an incredible ensemble cast with Vincere star Filippo Tilmi delivering a defiant and scathingly witty performance as Louise’s sickly brother.  Valeria Bruni-Tedeschi has created another memorable film following the success of Actrices and Easier for a Camel… and further demonstrates her incredible talent as both actor and director. A visual delight, A Castle in Italy is stunning viewing with gorgeous locations of both Italy and Paris to enjoy.


Weekly Recommendation: They are all very different but Bad Neighbours (a hilarious concoction of suburban mayhem and generational wars with great performances from Rogen, Efron and Byrne), Belle (an elegantly produced and finely performed period drama with an affecting challenge to Britain's legal and social mores) and The Double (a memorably odd, remarkably assured sophomore work, which offers up a mind-bending, aesthetically rich study of alienation and madness) are well worth seeking out. Reviews linked. I have also heard good things about Healing and Chef, which I intend to catch this week.
Posted by Andy Buckle at 8:25 PM