David Ayer’s (End of Watch) WWII-set tank epic is a hulking, mechanical beast of masculine adrenaline that rumbles along to Steven Price’s (Gravity) incredible operatic score. It does a lot of the heavy lifting in this rousing drama, that in bursts thematically resembles great war films like Platoon or Saving Private Ryan, only to fail on a few fronts – with its stock characters, romanticised machismo and somewhat extreme depictions. Still, the tanks have heft and character and Fury is an intense, grueling, visceral and claustrophobic representation of the sheer horrors of war – the incineration of life, the loss of innocence, the transformation of an ordinary human being into a monster– and the authentic mud-drenched combat sequences are very well done indeed. 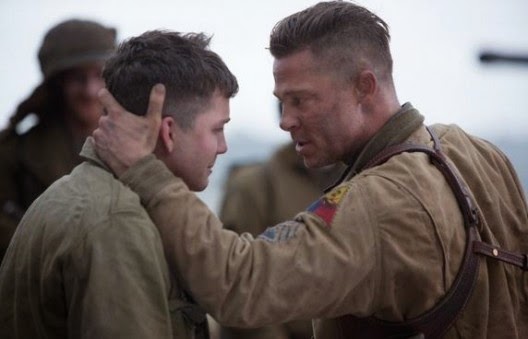 Brad Pitt stars as battle-hardened sergeant Don “Wardaddy” Collier who commands a Sherman tank (Fury) and its five-man crew, including Boyd Swan (Shia LaBeouf), Trini Garcia (Michael Pena) and Grady Travis (Jon Bernthal). When their other regular member is killed, Collier is assigned a fresh rookie in Norman Ellison (Logan Lerman). Under the orders of Captain Waggoner (Jason Isaacs), Collier leads his men on a series of deadly missions behind German lines. He tries his best to get Norman combat-ready, but their consistent contact with the enemy fast tracks his lessons. The unit camaraderie becomes strained when they find themselves outgunned and facing overwhelming odds. Forced to reconcile, they must call upon every reserve of heroism and courage in order to survive.


Continue reading at An Online Universe.
Posted by Andy Buckle at 7:47 AM