Screening at the upcoming Jewish International Film Festival, Zero Motivation, the excellent début feature from Israeli writer/director Talya Lavie, won the top prize for narrative world cinema at the Tribeca Film Festival. A black comedy addressing the mundanity of Israeli Army base HR management and secretarial duties, it focuses on a unit of female conscripts who find their camaraderie tested by the base’s comings and goings, and are willing to do anything to make their service bearable – while keeping their sanity and dignity. 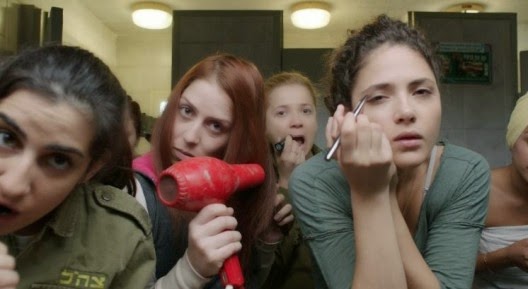 Set in a remote desert military base, we are introduced to a platoon of female soldiers forced into compulsory office service; including the reckless and insubordinate Zohar (an excellent Dana Ivgy, Cupcakes, Jaffa), her closest rebel-in-arms Daffi (Nelly Tagar, Footnote), the ‘Paper and Shredding NCO’ who has long been conspiring to get a transfer to Tel Aviv, and their commanding officer Rama (Shani Klein), trying hard to rise the ranks but continually foiled by the behaviour of her unit. While deep in paperwork, and continually serving coffee to the men who run the show, these subordinates pass the time by trying to beat their Minesweeper record on the PC, and causing general mischief, while dealing with an array of personal issues that could cause them to combust at any moment.


Continue reading at An Online Universe.
Posted by Andy Buckle at 6:36 PM