Bachelorette is stacked with outrageous situations and facing the necessary repair and clean of a ripped and stained wedding dress; the women take to the streets in a desperate early hour’s mission to save their friend’s big day. It feels like an escalator ride into new realms of zaniness and though many scenes will leave viewers cringing in disapproval (there’s cocaine snorting, binge drinking and candid sex chatter aplenty) there should be plenty of big laughs too. 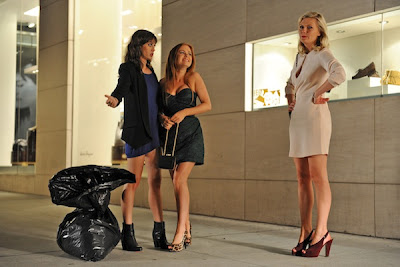 With their friend Becky (Rebel Wilson) set to marry her sweetheart, Dale (Hayes MacArthur), the remaining members of her old high school clique – Regan (Kirsten Dunst), Gena (Lizzy Caplan) and Katie (Isla Fisher) – reunite in New York City for the wedding and what turns into a wild eve bachelorette party.

In short, Bachelorette is a film about unpleasant people doing unflattering things. If that doesn’t sound like your thing then you probably won’t enjoy it. The women are genuinely loathsome, though certainly sympathetic on occasions, and their pratfalls draw mixed emotions of bewilderment, disapproval, contempt and amusement.

Continue reading at Graffiti With Punctuation.
Posted by Andy Buckle at 9:14 AM