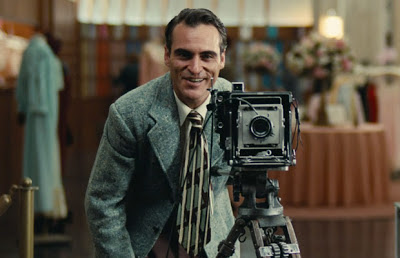 The Master is the highly anticipated new film from ambitious American writer, co-producer and director, Paul Thomas Anderson (Boogie Nights, Magnolia and There Will Be Blood). A grandiose achievement in almost every sense, The Master is a film that some will understandably find cold, contentious and frustrating. But for this reviewer, an admirer of all of Anderson’s previous films, within this evocative work of vibrant cinematic vision is a film that will offer rewards for inquisitive filmgoers for a long time to come. Not easily forgotten, it is a dark and haunting storm that stirs emotions, offers up individual moments that will leave a viewer in awe and through its explored themes, leaves a percolating concoction of contemplation and admiration.

At the fore of this story is Freddie Quell (Joaquin Phoenix in his first screen role since I’m Still Here), a World War II Navy veteran who is struggling to adjust to a post-war society. A gaunt, sickly-looking alcoholic with a bent back and a limp, emotionally and physically Freddie is a mess. He bounces between jobs – a portrait photographer and a vegetable farmer – and is consistently under the influence of toxic concoctions that are clearly unsafe to drink. He then stumbles onto a pleasure boat in San Francisco where he meets Lancaster Dodd (Phillip Seymour Hoffman) the leader (‘master’) of a philosophical movement known as The Cause. He sees something in Freddie, perhaps recognizing himself and relating to his personal struggles, and after accepting him into the movement as a patient and disciple, begins to exert his influence.

Continue reading at Graffiti With Punctuation
Posted by Andy Buckle at 10:52 PM