Hail is the tale of a broken man without self-control, and stuck within the confines of a violent criminal past, his present social position and the company he keeps, there is little hope for him evolving. When tragedy hits close to home, he feels like he has nothing to live for and descends into a spiral of merciless self-destruction and madness. Hail, a docu-drama of astounding authenticity, tells a nightmarish and uncompromising revenge tale brimming with harsh verbal and physical brutality and a sensory bashing that will be tough to shake. 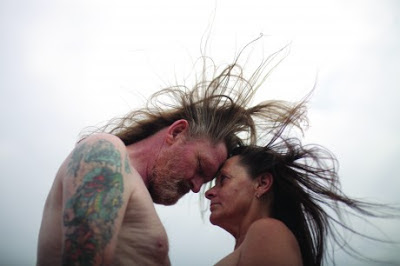 Based on the life and stories of former prisoner Daniel P Jones, who stars in the film as himself, Hail is a rough-looking film tracking the raw realities of the return of an ex-con to society following his release from a Melbourne prison. With his bold first feature Melbourne filmmaker Amiel Courtin-Wilson (Bastardy) blurs the line between fact and fiction and creates an observant, brutal and unsettling docu-drama sure to be admired by tough-skinned viewers.

Continue reading at Graffiti With Punctuation.
Posted by Andy Buckle at 9:55 AM