Oliver Stone (Platoon, JFK) has not had a great run of late with his feature films. Alexander was a bloated disaster in every sense of the word, and Wall Street 2 was a surely regrettable attempt to blend his successes of the past with the United States’ predicament at the time. Frustratingly, he continues his dire streak. 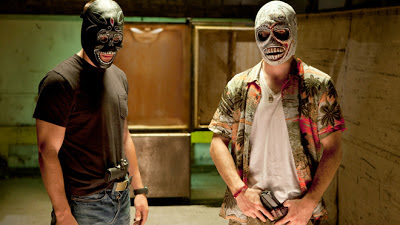 Our narrator here is Ophelia, known as ‘O’ (Blake Lively), who in the opening monologue reveals that she might or might not be narrating this story from the grave. She introduces us to her communal boyfriends and inseparable partners, Chon (Taylor Kitsch), a former Navy SEAL and mercenary, and Ben (Aaron Johnson), a decent and charitable Buddhist and talented botanist of illicit drugs. The pair of entrepreneurs run a lucrative marijuana business out of their Laguna Beach-front home, supplying the California-region with some of the best product ever distributed.

When a Mexican drug cartel, led by no-nonsense business-inheritor, Elena (Salma Hayek), and her mustachioed enforcer, Lado (Benicio Del Toro), proposes a partnership the boys choose not to comply, deciding to split to Indonesia. When O is kidnapped and help hostage in Elena’s estate, they realize they have to muscle-up, hatch a rescue plan and try and keep their prospering independence.

Continue Reading at Graffiti With Punctuation.
Posted by Andy Buckle at 8:40 AM