In cinemas this week: Nebraska, Le Week-End, Lone Survivor, Wolf Creek 2 and The Legend of Hercules. 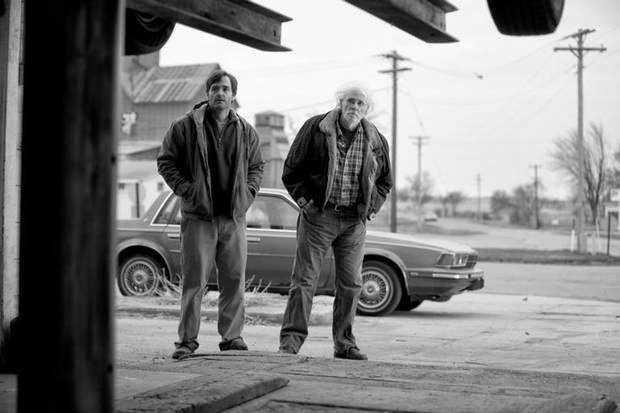 Nebraska - The latest from Alexander Payne (Sideways, The Descendants) is a stunning and sincere little black and white film about one of the oddest family road trips you will ever see. 70-something Woody Grant (Cannes Best Actor winner Bruce Dern) is adamant that he has won a million dollars. Whether he believes he has actually won, or just wants to give his life a sense of purpose in his twilight years, we aren't ever sure, but he manages to coerce his estranged son (Will Forte, perfect) to drive him to Nebraska to claim the fortune. The journey there is both incredibly funny and touching in the most surprising of ways. The characters that populate this simple but subtly layered story, are the real deal. They are everyday Midwesterners who each want a share of Woody's new-found wealth. These are family who have disowned him and friends who ridicule him. He finds an unlikely ally in his son, dragged along begrudgingly but whose own life is in disarray. Father and son bond for the first time in years, and we learn there is much more to Woody than his irregular speech, physical liabilities and tales of his alcoholism and irresponsibility. With veteran subtlety screenwriter Bob Nelson has infused this melancholic tale with pitch-perfect commentary on extended family and the universal desire to leave this earth with a sense of fulfillment. I have been obsessed with this film since I watched it last month. I loved the performances (I haven't mentioned June Squibb, but she's hilarious as Woody's tough-skinned, foul-mouthed wife) and the score will be on regular rotation all year. Payne's BEST film after Sideways (which is one of my favourite films ever) and my favourite film yet released in 2014. ★★★★★

Le Week-End - Directed by Roger Michell (Notting Hill, Enduring Love and Venus) and written by frequent screenwriting collaborator Hanif Kureishi, Le Week-End is a strange little film. Equally saddening and heartwarming, there is a resounding truthfulness and romanticism to this study of a veteran married British couple, Nick and Meg Burrows (Jim Broadbent and Lindsay Duncan). Celebrating their 30th wedding anniversary with a rare exotic escape in Paris they are amidst a disillusioning crisis that they seem aloof to resolving. Will this weekend heal their wounds, or be an opportunity to say goodbye? Lightly avoiding sentimentality and punishing misery I found this quite delightful. The performances are spot on. Broadbent is always great, but the film delivers subtle emotional sucker-punches courtesy of his performance. The scene-stealer though is a compelling, perfectly cast Jeff Goldblum, who infuses the film with a weird energy. ★★★1/2

The Legend of Hercules - In the epic origin story THE LEGEND OF HERCULES, Kellan Lutz stars as the mythical Greek hero - the son of Zeus, a half-god, half-man blessed with extraordinary strength. Betrayed by his stepfather, the King, and exiled and sold into slavery because of a forbidden love, Hercules must use his formidable powers to fight his way back to his rightful kingdom. Through harrowing battles and gladiator-arena death matches, Hercules embarks on a legendary odyssey to overthrow the King and restore peace to the land. Renny Harlin directs, which means avoid.


Weekly Recommendation: What can I say to get everyone to see Nebraska? Just see it, okay. Le Week-end is decent too. Both are coming to Dendy Newtown. I will endeavor to check out Lone Survivor too this week.
Posted by Andy Buckle at 8:01 AM