2013 Motifs in Cinema: Man Against Society

I was lucky enough to be asked by Andrew Kendall of Encore’s World of Film and TV, as I was last year, to be part of his annual Motifs in Cinema blog-a-thon. Eager to delve into the cinema of 2013 – a year I enjoyed immensely – I agreed to take part. The motif I selected was ‘Man versus Society’.

Here is Andrew’s explanation of the blog-a-thon: Motifs in Cinema is a discourse across film blogs, assessing the way in which various thematic elements have been used in the 2013 cinematic landscape. How does a common theme vary in use from a comedy to a drama? Are filmmakers working from a similar canvas when they assess the issue of death or the dynamics of revenge? Like most things, a film begins with an idea – Motifs in Cinema assesses how various themes emanating from a single idea change when utilized by varying artists.

In a number of films released across the globe in 2013, one of the central conflicts was that of man (and woman) in conflict (repressed, prejudiced or outcast) against society at large. In several of the examples I will offer the society in question is insular and isolated, sent into turmoil following the repercussions of an event, while others are ideologically, culturally and politically tied to the country of setting.

In Danish writer/director Thomas Vinterberg's haunting drama, The Hunt, Mads Mikkelsen (awarded Best Actor at the Cannes Film Festival), stars as Lucas, a popular small town Kindergarten teacher. When Klara (Annika Wedderkopp), the young daughter of his best friend Theo (Thomas Bo Larsen), tells a story detailing inappropriate sexual contact from Lucas, it’s severity quickly escalates. The adults, informed of the claims by the school's principal despite there yet being no proof beyond Klara's account, are blinded by rage and disgust, turn against Lucas and begin a campaign to ensure that justice is served, targeting not only his professional career and personal reputation, but also his family. Lucas is wrongfully accused, there’s no doubt about it, but when more stories of abuse surface - the result of insular paranoia and guardian-coerced testimony - the mounting lies spiral out of control to the point where the life of this innocent man faces ruin. He shelters from the tide of hatred, enclosed within his own home. But even that comes under threat. The courage he shows just stepping into the local mall or confronting his accusers in church, is extraordinary. This tense study of an insular community unnervingly embroiled in hysteria and turmoil is maddening to watch as blind social allegiance acting on unreasonable instinct demonizes a once-valued citizen. 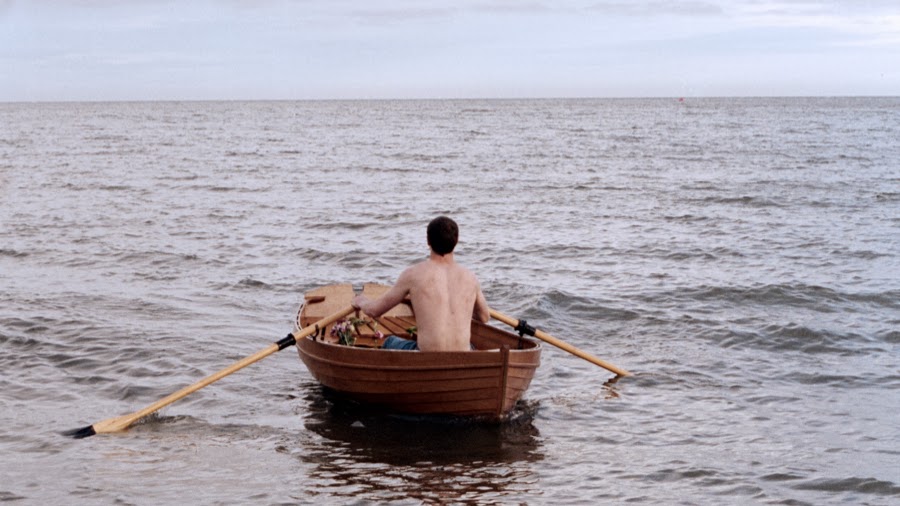 In Paul Wright’s brilliant debut feature, For Those In Peril, Aaron (George MacKay), a young misfit living in a remote Scottish fishing community, is the lone survivor of a mysterious fishing accident that claimed the lives of five men including his older brother, Michael. With ocean folklore a powerful (and misguided) influence the village holds Aaron responsible for the tragedy, and he immediately finds himself an outcast. Struggling with his own demons, unable to remember what happened out on the water, he refuses to believe that his brother has died and holds misguided hope in his return. Though he briefly finds comfort in spending time with his brother’s former girlfriend, his worsening anxieties eventually bring him in confrontation with his darkest fears.

Aaron is at the centre of For Those in Peril from the beginning, and while the film is set up to be about a young man dealing with grief and guilt, and coming to the demoralizing realization that by being alive draws malevolence from others, it then becomes something very different. We come to understand just how essential Aaron’s perception is as the story seamlessly shifts into his headspace. Wright utilises various visual formats and discordant audio soundbites, challenging his audience to draw their own conclusions from his unconventional techniques. We are offered fragments of the past from various perspectives and the present from a very unreliable narrator. Aaron’s confusion, frustration, and unwavering sense of hope is certainly understandable considering his ordeal, yet no one in the town seems to accept that he belonged on the boat in the first place nor deserved to return. Why is that? He escaped a meeting with a monster but will never rest until he confronts it and re-earns the respect of the society he once called home.

Mystery Road follows an indigenous detective who on return to his hometown finds himself the sole investigator into the death of a young girl. In Ivan Sen’s gripping, well-acted and admirably patiently crafted police procedural a harrowing mystery collides with national prejudice. This provocative contemporary western depicts the crime and corruption that continues to pollute small isolated towns of outback Australia.

Detective Jay Swan (Aaron Pedersen) returns to his Western Queensland country hometown after a stint in the ‘big smoke’, headlong into a case involving a murdered indigenous girl.  Wild dogs, heard in the vicinity at the time, and rumours of a suspected drug ring become some of the primary clues Jay follows to every corner of the town leading to the unveiling of further disconcerting operations. He suppresses the prevalent resentment he faces as he investigates – both from the distrusting indigenous community, who have all-but ostracized him and fear he has returned to throw his weight around, and the uncooperative white folk – as well as dealing with a contemptuous and apparently lackadaisical local police force who he is reluctant to entrust. Surrounded by unforgiving, dwarfing nature, the isolation results in the town becoming a breeding ground for criminal enterprises, and the bored and disillusioned youth find themselves easily exploited. As we watch this determined man try to win back his identity and credibility within his former community and prove that he has the skills to make a difference, the suspense mounts.

The dusty, ochre-tinted landscape is captured strikingly by Sen’s camera, and he is very interested in surveying the town from an aerial perspective. Jay is made to appear trapped in maze, a claustrophobic hotbed of secrets set to combust if the wrong stone is overturned. But how much do the local police know, and are they turning a blind eye to this illegal profiteering? Are they involved? Jay seeks justice, but finds that only observant old-timers and an excitable forensic specialist supply him useful intelligence. Being a culturally specific police procedural, which addresses a number of issues plaguing Australian lower class outback dwellers – drugs, alcoholism, gambling, youth dysfunction and an unchecked gun culture – and the corrupt white police force overseeing it all, made it all the more fascinating. The well-choreographed final face-off offered up something completely unexpected. 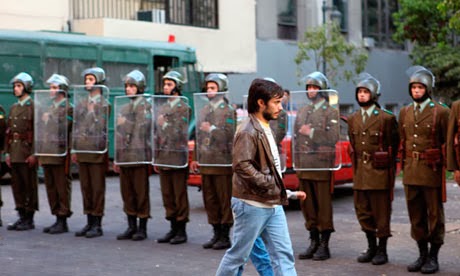 No is an engrossing, behind-the-scenes period docu-drama from Chilean director Pablo Larrain, revolving around the pivotal 1988 referendum to usurp dictator Augusto Pinochet. Gael Garcia Bernal stars as Rene Saavedra, a talented and sought-after ad-man who is poached to lead the creative team behind the NO campaign. Despite pressures up the hierarchy, Rene wasn’t interested in provoking fear or bombarding viewers with the images presenting the negatives of the Pinochet regime, believing a happy, upbeat and colourful tone was the key to winning over the people. Lucho Guzman (Alfredo Castro), Rene’s Boss, and his YES associates view his siding as traitorous and foolish, but Rene accepts the challenge to convince an oppressed nation that the future will be defined by positivity. No is not just a privileged insight into the tumultuous period of Chilean politics and social upheaval, but also a fascinating look into the advertising industry itself – the daily decision-making, the battle of ideas and point-of-view within the creative team, and obstacles such as censorship and political involvement. No is a sublime artistic recreation of how one man’s bold vision and optimism turned the tide for the people of Chile during a period of political and social oppression. 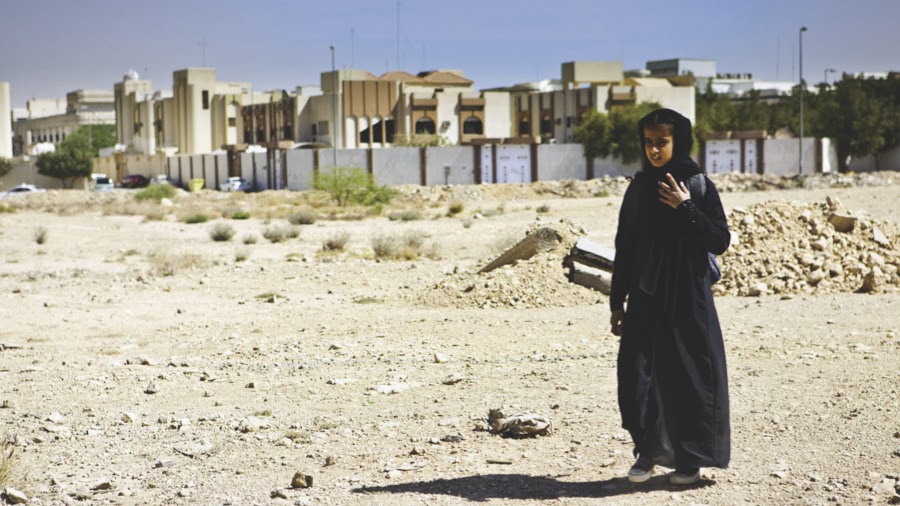 Written and directed by Haifaa Al-Mansour Wadjda is the first film to be shot in its entirety on location in Saudi Arabia. It is also the first feature from a female Saudi filmmaker. Admirably honest and unwaveringly optimistic, Wadjda provides fascinating insight into everyday life in the nation’s capital city, Riyadh, and tells a sweet and uplifting tale of the earnest belief in life’s potential and teenage independence within a strict conservative culture. With a striking performance from young lead Waad Mohammed, this heartfelt crowd-pleaser is a very important work of international cinema.

At school, Wadjda is rebellious, blatantly disobeying the strict customs that virtuous young women must abide by and she has several run-ins with her upstanding headmistress. On the streets she befriends a local boy and gets herself into many unladylike situations. She swindles her classmates for cash by selling bracelets and mix tapes, hoping to buy the bike herself, eventually deciding to try and win the cash prize offered by the school Quran recitation competition. Her attention to her studies, and the memorizing of the religious verses begins to change people’s perspective of her.

During the film we get a sense of the restrictions imposed on women in Saudi society. Wadjda’s mother, as often as she is concerned for her daughter, begins to understand that her culture is in need of some boundary flexing and becomes more accepting of what makes her daughter happy, and challenges social norms. It is the beautiful relationships that are most instrumental in making this a rewarding film. While the film’s gorgeous cinematography and scripted drama removes it from the conventions of neorealist cinema, there is still a sense of natural life unraveling before the camera. The process of making this film must have been very difficult and I have great respect for Al-Mansour’s bravery in fighting to have this film made, for bringing Saudi society to the cinematic landscape and for telling such a lovely story.

Stephen Soderbergh's Side Effects is as much a character study as it is a study of a pill-pushing society where pharmaceutical companies have become a super-power. It challenges the involvement that pharmaceutical companies, and their professional minions – medical practitioners (GPs, psychiatrists etc.) – have on mental health treatment and the recovery of patients. Endorsing these specific prescriptions they may try and sway their patients to take experimental drugs at reduced costs to aid their research and consultancy.

As a result of this pill-pushing society, Dr. Banks (Jude Law) is publicly blamed for his prescription of Ablixa, who had knowledge that Emily (Rooney Mara) had reacted oddly (but not that it was a documented side effect to the drug) but still didn’t change her prescription. His decision was fueled by Emily’s claims that the drug was uniquely working. We know what happened is not directly his fault, but because he is the trusted expert, he becomes a target for negligence and irresponsibility. Eventually Side Effects becomes an investigative procedural, with Banks just as beset on clearing his own involvement as he is about finding out the truth behind Emily’s health and actions.

Banks’ unwavering determination to put his life back together, results in some jaw-dropping discoveries that prove his competency in his field. It is interesting to note that Law actually plays a character in Contagion who manipulates people into choosing one method of treatment (a hoax) for notoriety and material gain. Here, he genuinely cares for the well-being of his patients. He’s an inquisitive man who is a professional first and foremost who has taken on an overload of roles to support his family. There is a lot at stake, and the committed Law is terrific in conveying his growing anxieties.
Posted by Andy Buckle at 9:27 PM