I always find it incredible how re-watchable Office Space is. Every time I feel the urge to watch this film, I enjoy it more than previous viewings. There is something so likeable, supportable and inspiring about the central character, Peter Gibbons (Ron Livingston, Band of Brothers), so sympathetic about the under appreciated IT guys,  Michael (David Herman) and Samir (Ajay Naidu), and so distasteful and dislikeable about Gary Cole’s scene-stealing coffee mug-wielding boss, Bill Lumbergh, that you can’t help but get wholeheartedly involved in the film. It’s a film that doesn’t break any comedic boundaries, and is a little meandering, but is understandably renowned for it’s accuracy in satirizing relatable elements of daily working life, it’s appreciative details (the recognition of a door handle likely to give an electric shock), it’s witty and quotable dialogue and several classic moments – including the character’s destruction of photocopier as though it were a vicious mob hit. 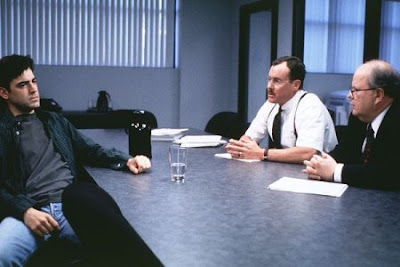 The film is so funny that even the opening credit sequence produces multiple laughs. The success of this film is based on a viewer’s position to relate, and anyone who has worked in a cubicled office building, spent hours upon hours starring absently into a computer screen or at the sheet of paper in front of them, and been harassed by multiple bosses telling them the same thing, should find this film uproarious. I haven’t and I still find it hilarious. On the other hand, I have been stuck in traffic and through a blend of impatience and frustration changed lanes only to find myself ground to a halt and watch the lane I was formerly in start to move. The sad thing about this instance is that for these characters is that it is just the start of their day.

The film focuses on three key characters, mentioned above, who are fed up with their software programming positions at Initech, and decide to hit back at the company by installing a virus that rips off the accounting system and transfers fractions of dollars into an account. However, a misplaced decimal point causes the virus to steal more than intended. A bunch of intriguing characters pop up along the way, including Milton (Stephen Root), a meek, obsessive employee who mumbles to himself and despite being laid off years prior continues to work at the company, Lawrence (Diedrich Bader), Peter’s life-satisfied neighbor, Drew (Greg Pitts), a jocular Initech employee who tells Peter about the ‘O-face’ and Bob Slydell (John C. McGinley), a consultant brought in to downsize the company. 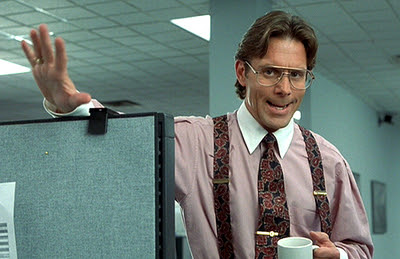 Sure, some of the performances are ordinary, and the scenes featuring Milton grow tiresome, but almost every sequence featuring Gary Cole and Peter and his pals is distinctly memorable. This is also one of Jennifer Anniston’s most likeable performances – she plays Peter’s love interest - which is no small feat. But this film isn’t really about the performances, or Mike Judge’s skills as a director, but the astute awareness of odd quirks in the daily routine of office workers and white collar employees, and themes of disillusionment about the mundane routine of life and the ever-present quest of being able to balance life’s essentials (a profession) with a social life and supporting activities that ensure contentedness and happiness. In this sense, Office Space works brilliantly. At just 89 minutes, it’s light, breezy viewing and a rightfully respected cult favourite.