In cinemas this week: Transcendence, Canopy and The Crossing. After last week's bombardment of releases, it is nice to see a lighter week. 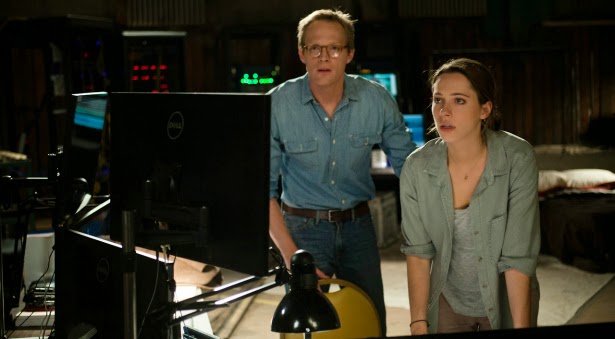 Transcendence: Dr. Will Caster (Johnny Depp) is the foremost researcher in the field of Artificial Intelligence, working to create a sentient machine that combines the collective intelligence of everything ever known with the full range of human emotions. His highly controversial experiments have made him famous, but they have also made him the prime target of anti-technology extremists who will do whatever it takes to stop him. However, in their attempt to destroy Will, they inadvertently become the catalyst for him to succeed-to be a participant in his own transcendence. For his wife Evelyn (Rebecca Hall) and best friend Max Waters (Paul Bettany), both fellow researchers, the question is not if they can...but if they should. Their worst fears are realized as Will's thirst for knowledge evolves into a seemingly omnipresent quest for power, to what end is unknown. The only thing that is becoming terrifyingly clear is there may be no way to stop him.

Canopy: Wartime, 1942. Singapore. An Australian fighter pilot shot down in combat awakens suspended in the treetops. As night devours day, he must navigate through a dangerous jungle in search of sanctuary. Transcending language and culture, CANOPY is a cinematic exploration of the collision of war, nature and its impact on humanity. Benefits from skillful (and frequently stunning) location photography, immersive sound captures and a sweaty pressure-cooker of an atmosphere. The flashes of war conflict penetrating the overhead jungle canopy, and the enemy soldiers silently navigating similar obstacles as the hapless protagonist, add moments of haunting unease to this hypnotic (often elusively hallucinatory) and dialogue-sparse survival drama. More a sensory experience than a narrative-driven film, but the thin plot doesn't come close to filling the 80 minute run-time, and I was intermittently engrossed. This does not look like a film that has been crowd-funded through Pozible. There are some incredible captures. Still, an admirably ambitious project that doesn't quite work out. ★★1/2 (link to Blake Howard's more positive reaction at GWP).

The Crossing: A feature documentary following two young Australians, Clark Carter and Chris Bray, as they set off on the adventure of a lifetime. The pair attempted to drag their home-made kayaks more than one thousand kilometres across a remote island in the Arctic. They battled freezing temperatures, knee-deep mud, razor sharp rocks, got chased by wolves and hid from polar bears until finally being forced to admit their dream was over. After 58 days alone in the wilderness, they had covered only a third of the distance. Unable to let go of their dream, three years later Clark and Chris confidently returned to finish the job. They were a little older, wiser and thought they knew what to expect from the island. They re-designed and re-built a custom cart to carry the five hundred kilograms off food and equipment needed to survive a hundred days in the Arctic. After a positive start, things yet again take a turn for the worse. The duo soon realised the island isn’t going to let them across without a fight. Edited from more than a hundred hours of stunning high definition footage shot by Clark Carter and Chris Bray, ‘The Crossing’ is an insight into the minds of two young adventurers biting off far more than they can chew.

The Crossing is screening at:


Weekly Recommendation: I would like to see The Crossing. I remember it picking up an audience award - I think at last year's Sydney Film Festival. The reviews for Transcendence have been terrible, so I think I am going to skip it. I still haven't seen The Muppets or The Amazing Spider-man 2, plus I want to re-watch The Grand Budapest Hotel and Only Lovers Left Alive, so I'm not short on options.
Posted by Andy Buckle at 7:43 AM