Nicholas Stoller, the ever-reliable director of Forgetting Sarah Marshall, Get Him To The Greek and The Five Year Engagement has collaborated with producers Seth Rogen and Evan Goldberg (Superbad, This is the End) and first-time screenwriters Andrew. J Cohen and Brendan O’Brien for Bad Neighbours. A potential future classic, this vulgar, hilariously out-of-control adult comedy of suburban war and mayhem, generation difference and general misbehaving sees new-dad Seth Rogen and Frat-king Zac Efron learn a thing or two about ‘growing up’. It might make you feel guilty for laughing, and yet the laughs never let up. 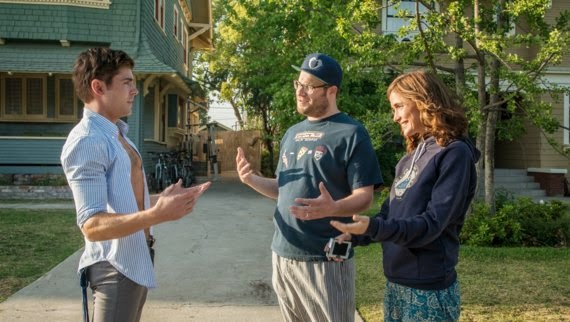 Mac and Kelly Radner (Rogen and Rose Byrne) have just had their first child and moved into a new neighbourhood. While still coming to grips with their strictly structured and social-free lifestyle – Kelly remains at home with her baby monitor glued to her hand while Mac works a dreary office job – they are nonetheless excited by their new addition to the family. But, they start to face further unexpected difficulties following the establishment of a fraternity house, ruled by President Teddy (Efron) and VP Pete (Dave Franco), in the adjacent residence. Mac and Kelly decide to approach the youths dressed ‘hip’, bringing along a peace offering and making warm introductions. In-turn they are invited to the house-warming party, with Mac and Teddy bonding the morning after on a comedown from mushrooms. But, after the fraternity’s excessive parties rouses a 911 call the relationship soon turns sour and an intense conflict ensues. The frat-pack takes pleasure in continually harassing the couple, but with the help of Mac’s colleague Jimmy (Ike Barinholtz) they elaborately retaliate in an attempt to have peace returned to the neighbourhood.


Continue reading at Graffiti With Punctuation.
Posted by Andy Buckle at 7:26 AM