In cinemas this week: Snowpiercer, Still Life, Hercules, Deliver Us From Evil, Devil's Knot, Mrs Brown's Boys D'Movie and Once My Mother. 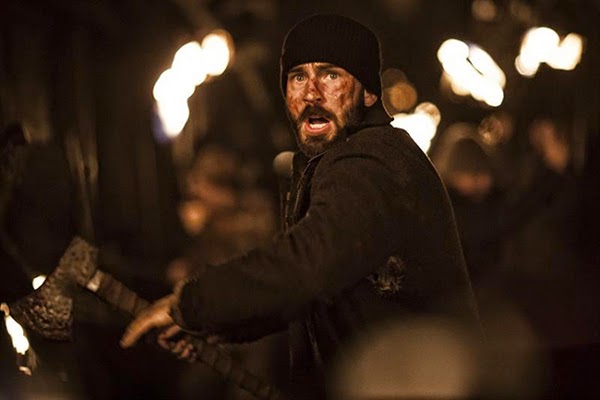 Snowpiercer - The much-discussed sci-fi epic from director Bong Joon Ho (The Host, Mother). The film is set in the year 2031, and the world is a frozen and uninhabitable. Seventeen years earlier measures were taken to stop global warming, but the experiment was a disaster, killing everything in the process. Those lucky enough to survive boarded the giant rattling ark called the Snowpiercer, a train that circumnavigates the globe over the course of exactly one year. We are first introduced to those living in the back of the train, the lowest class. They sleep cramped together, their hygiene is appalling, their only source of food is a manufactured protein block distributed once per day, they are beaten and mistreated by the train’s guards and have been deprived everything that the upper class forward carriages consume in lavish excess. Amongst these tail-dwellers are Curtis (Chris Evans), Edgar (Jamie Bell), Gilliam (William Hurt) and Tanya (Octavia Spencer), and they are desperate to shake up the world order. Continue reading at Graffiti With Punctuation.

Still Life - For over 22 years, life for the unassuming John May (an indelible performance from the extraordinary Eddie Marsan) has been his work for the local council in South London, finding the next of kin for those in his community who have passed away alone. But in this age of ‘efficiency’, John’s meticulousness and care is no longer deemed necessary, and he is abruptly made redundant. John is left with one assignment: a search for the relatives of an elderly neighbour, Billy Stoke.
As he journeys beyond London to piece together Billy’s past, John uncovers a life of mischief, misadventure, love and regret, most of all for an abandoned daughter, Kelly (Joanne Froggatt, Downton Abbey) whom John manages to locate. These two insular people are naturally drawn to each other, and as friendship blossoms, John’s outlook opens imperceptibly to life’s possibilities. Still Life is a resonant and universal celebration of dignity, community values and human connection, and ultimately, all that life is worth living for. If you can forgive a late blunder, you will love Still Life. It is delicate, beautiful, attentive and perfectly paced. Marsan is amazing. Incredibly sad, though. I don't cry often in films but I was tested here. ★★★1/2

Hercules - Both man and myth, Hercules (Dwayne Johnson) leads a band of mercenaries to help end a bloody civil war in the land of Thrace and return the rightful king to his throne. A tormented soul from birth, Hercules has the strength of a God but feels the suffering of a human. Unimaginable villains will test the mythical power of Hercules in director Brett Ratner’s take on the epic action hero.

Deliver Us From Evil - New York police officer Ralph Sarchie (Eric Bana), struggling with his own personal issues, begins investigating a series of disturbing and inexplicable crimes. He joins forces with an unconventional priest (Edgar Ramirez), schooled in the rituals of exorcism, to combat the frightening and demonic possessions that are terrorizing their city. Based upon the book, which details Sarchie's bone-chilling real-life cases.

Once My Mother - When Australian filmmaker Sophia Turkiewicz was seven years old, her Polish mother, Helen, abandoned her in an Adelaide orphanage. Sophia never forgot this maternal act of betrayal. Now in middle age, as Sophia examines her troubled relationship with Helen, she discovers the story behind Helen's miraculous wartime escape from a Siberian gulag, her subsequent survival against the odds and the truth about an historic betrayal involving Stalin and the Allies. With Helen sliding into dementia, Sophia must confront her own demons. Did she ever truly know this woman who became her mother? Does she have it in her heart to forgive her? And is it too late?

Devil's Knot - In 1993 West Memphis, Arkansas was rocked by the brutal murder of three eight year old boys. The police very quickly accused three teenagers, claiming they had killed the children as part of a satanic ritual. Devil's Knot chronicles this harrowing true story from the perspective of one of the mothers, Pam Hobbs (Witherspoon) and the investigator for the accused boys’ defense team, Ron Lax (Firth). Whilst the parents and the community struggle to cope with the heinous nature of this crime and call out for those responsible to be brought to justice, Lax discovers that the prosecutorial case is based entirely on circumstantial evidence and prejudicial assumptions about the accused teenagers’ love of goth culture and heavy metal music.


Weekly Recommendation: This is the second Hercules film to screen in cinemas in 2014. Can you believe that? The Rock is an entertaining performer, but there is no way I am watching that. If there is one limited release film you should try everything to see - Dendy Newtown screen it here in Sydney, Nova in Melbourne - it is Snowpiercer. It is unlike anything you have ever seen. Still Life is another limited release - Palace Norton Street are screening it - with the potential to change the way you live your life. I am going to be checking out Deliver Us From Evil this week because I enjoyed Scott Derrickson's last film, Sinister. Reviews have not been favourable, however. Once My Mother sounds pretty powerful too.
Posted by Andy Buckle at 8:24 AM